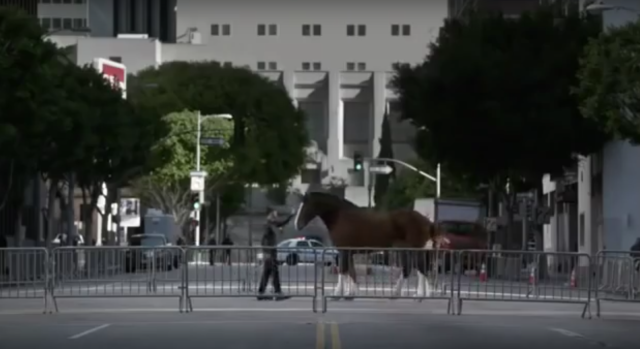 Get your box of tissues and prepare to ugly-cry, because there are certain things that just hit you right in the feels.

I’m generally a pretty steely-eyed person, if it’s not too narcissistic to say that about oneself. I do not cry at weddings. I rarely cry at bad news (which, admittedly, makes me feel a bit awkward). I recall a time a bunch of roommates and I were watching a sad movie in college and I openly mocked my male roommate who bawled his little eyes out at the tragic ending of the film.

But out of the Muggle world and safe within my own equestrian bubble, I’ve found a few triggers that are guaranteed to get the waterworks started pretty much every time. Certain videos, stories, commercials, even a flipping MOVIE TRAILER are enough to get me going. And I’m willing to bet they’re going to make you get all choked up too.

Let’s count them down together, shall we?

7. Girls getting surprised with the horse they’ve always wanted

Maybe my tears are just a sympathetic response to the overwhelming emotions that these people are feeling when they find out that they’ve gotten the best gift a gal could ever ask for. Actually, it’s probably just those onions I was cutting in the other room. Yeah, that’s it.

6. The end of Hidalgo

First of all, who doesn’t dream of buying a billion acres of the American West and then busting open a corral full of mustangs to let them run free as the wind? Especially when you’ve saved those horses, and that land, from systemic slaughter.

And if the sight of a kajillion beautiful horses running free doesn’t get you going — spoiler alert! — just wait until Frank looks back at Hidaglo, standing there oh so patiently, like the good horse he was trained to, after they had ridden through literal hell together halfway around the world and saved a kidnapping victim and fought a tiger or whatever else crazyness happened in this film, and Frank realizes that what he has to do to best serve his partner of a thousand miles is turn him loose. And he does. And my heart breaks into a thousand tiny irreparable pieces.

5. Owners reunited with horses of a lifetime after years of separation

The only thing that gets me going even worse than letting your beloved partner go is when, due to the unfathomable turning tides of this universe, somehow get your beloved partner back. Any tale of a long-lost reunion puts a giant lump in my throat and sets my eyes to burning. Like, say, this heart-wrenching essay penned by our very own Leslie Wylie about reuniting with her childhood pony Mishka.

Fun fact: if you’re reading this on the day it’s published, Thursday, June 9, I am at this exact moment reuniting with a much-beloved pair of draft horses that I thought I had said goodbye to forever. So you and I, united at this moment of readership, are both weeping happy tears together.

4. The trailer to Spirit: Stallion of the Cimarron

Confession: I’ve never seen this movie. I don’t dare, because if the trailer wrecks me this badly there’s no way I’m making it through a full 90 minutes of anthropomorphized horses with weirdly human facial expressions and eyebrows. I just can’t do it.

To be honest, a large part of the emotional punch in the gut for this brief little animated torture is likely due to the fact that I worked for a number of years on a ranch in Wyoming on the eastern neighborhood of Yellowstone that basically looked exactly like a real-life version of this trailer, down to the way we would turn our horses loose at the end of the day in one big joyfully-running herd. Seeing a tiny recreation of that scene in cheerfully-bright color reminds me how much I miss the place.

Happy Belmont week — whether you’re a fan or horse racing or not, you’d be hard-pressed to deny that this is one of the most epic equine performances of all time, watching Big Red “moving like a tremendous machine” and just eating up the track like the blessed athlete that he was.

Bonus points for whoever decided to layer a subtle yet motivational score to this race, because that REALLY is not helping.

2. Charlotte Dujardin & Valegro’s How to Train Your Dragon record-shattering freestyle

I firmly believe that it’s the soundtrack that really makes this one induce weeping — combined with Valegro’s ethereal movement and Charlotte’s masterful horsemanship, of course. But let’s go ahead and put it out there that emotionally-manipulative movie people have traditionally used the little Irish flute to musically embody the spirit of the horse since the days of my horse-movie-filled childhood. Listening to that piping combined with Valegro just dancing his way around the sandbox brings tears to my eyes. The little flutey bit when he nails those canter pirouettes? Dead. I’m dead.

Like, I can’t even. My love for draft horses definitely does not help my emotional fortitude during that minute and a half every Superbowl Sunday (I started just excusing myself from the room whenever one came up as to avoid massively embarrassing myself by ugly-crying).

I mean, look at this. LOOK AT THIS LITTLE BABE BEING SO ADORABLE.

AND THEN LOOK AT HIS GIANT CLYDESDALE PARENTS LETTING HIM BELIEVE THAT HE IS THE WORLD’S GREATEST.

WHO AM I KIDDING HE IS THE WORLD’S GREATEST. Seriously, nothing could possibly hurt my soul any more than this.

Oh wait, except FOR THIS ONE. Stevie Nicks, just shut your mouth and stop. Stop everything. This whole thing.