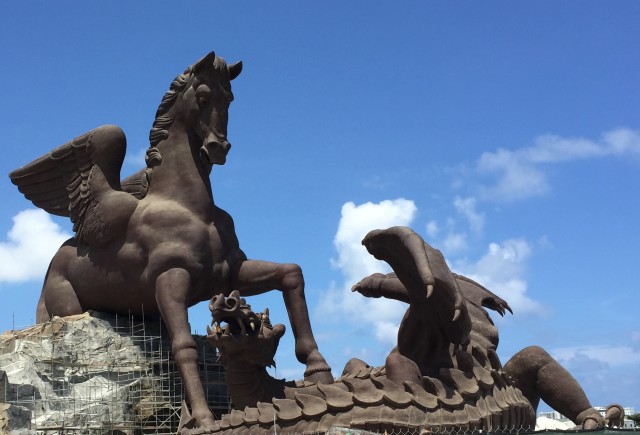 The latest brainchild of Frank Stronach of the Stronach Group, the Pegasus World Cup offers a staggering $12 million purse — and a $1 million buy-in for the mile and an eighth to be held in January of 2017.

The brand-new (if slightly gaudy) Pegasus/dragon sculpture gracing the site of the planned Pegasus entertainment park at Gulstream. Are you sensing a theme? Wikipedia/Ines Hegedus-Garcia/CC

Move over, $10 million Dubai World Cup — there’s a new massive purse to be chased. Frank Stronach of the Stronach Group announced early in 2016 his plans for the Pegasus World Cup, to be the world’s richest horse race and held at Florida’s Gulfstream Park.

But there are to be no qualifying races, no points system or earnings requirements — racehorse owners simply purchase their spot for a cool $1 million, with entries limited to 12 spots. Those entry fees make up the purse, with $7 million awarded to the winner, $1.75 million to second place, $1 million for third and $250,000 each for the other horses in the race. That $1 million entry also grants owners the rights of shareholders in the Pegasus World Championship, with all other revenue generated by the race to be divided among the twelve horse owners.

However, even with that kind of money at stake, the plan came under criticism almost immediately from turf writers and racing fans, who brought up some legitimate questions:

Why a mile and an eighth? As far as American horse racing goes, this is simply an odd distance. It doesn’t help that the lay of the track at Gulfstream will put the field on an awkwardly-short straightaway before they head into the first turn.

Why the end of January? While the original intent was to make sure the PWC doesn’t conflict with the Dubai World Cup, scheduling the race for January 28, 2017 throws a new loop into trainers’ plans. Most American racehorses aren’t in training for January starts; the American race calendar follows a three-season model with spring, summer and fall meets.

One often-quoted example would be Nyquist, who had a heavy juvenile season, has been in intense training for the Triple Crown and will presumably return to training after recuperating from an illness to prepare for summer stakes and the Breeders’ Cup. Instead of resting after the Breeders’ Cup, he’d need to stay in work to be prepared for the PWC.

On the other hand, a top purse in the United States might keep more horses at home, rather than shipping around the world to take a stab at Dubai, a journey that’s notorious for wearing horses out. The selected date early in the year also means that horses could retire to stud after the race and still stand for the current season.

What happens if 12 owners don’t want to buy in? The whole $12 million purse/richest in the world thing only works if all 12 spots are sold. Working in the owners’ favor is the rule that horses can be leased, shared or contracted, or the spot can be sold if the owner chooses not to enter a horse they actually own. Original entrants get first crack at participating in future PWC races as well, sweetening the deal.

However, in answer to this question, it’s worth noting that all 12 spots sold within a week of the official announcement in May. Buyers include Reddam Racing (owners of Nyquist), California Chrome LLC (owners of the namesake horse) and connections of Coolmore Stud, among many other notable names in Thoroughbred racing. (While it’s not set in stone that these horses will necessarilyy enter, imagine a Nyquist-California Chrome showdown. Just think about it.)

In the meantime, we wait to see how the rest of the 2016 racing season plays out and scan racing news for hints at what horses might be entering the Pegasus World Cup. We’ll bring you updates as they become available!