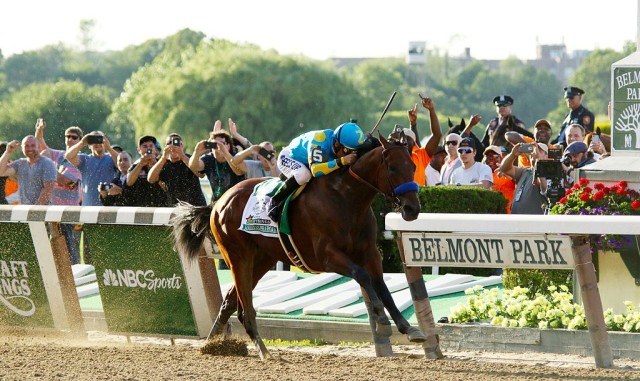 On June 6, 2015, the great drought in American Thoroughbred racing was finally broken by American Pharoah as he cruised home in the Belmont Stakes five and a half lengths in front, on the heels of wins in the Kentucky Derby and the Preakness Stakes. Owned by Zayat Stables, trained by Bob Baffert and ridden by Victor Espinoza, American Pharoah was the first Triple Crown winner in 37 years — for horse racing fans in my generation, this was the first time we had ever witnessed this elusive accomplishment.

One year later, June 6 is being celebrated on tracks all over the country as Pharoah Day, with its own #PharoahDay hashtag and plenty of reminiscing. We’re celebrating too: watch all three legs of American Pharoah’s historic Triple Crown victory.

Followed by a memorable Preakness, in which the post parade took place in a thunderstorm and the race in a downpour:

And finally, the electrifying performance that was the Belmont Stakes. If this race call doesn’t give you goosebumps, check your pulse.

American Pharoah’s full sister American Cleopatra has reportedly started training with Bob Baffert and should make her track debut in the near future — we’ll keep an eye out for this special filly! Meanwhile, American Pharoah has started a much-anticipated stud career at Coolmore America with mares confirmed in foal for 2017.