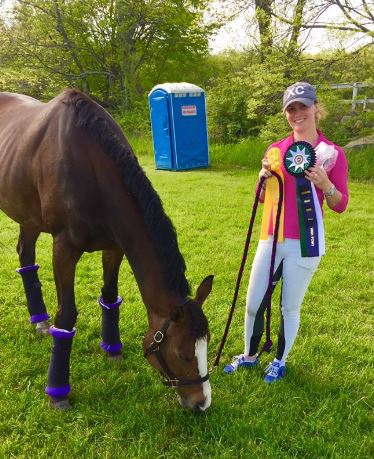 The driver has still not been found.

New York eventer Kait Kennedy and her Off the Track Thoroughbred Cali are lucky to be alive following a scary hit and run incident in Schodack, New York, a suburb of Albany.

According to Kait, she was riding alongside a paved road on her way back to their barn after a trail ride. A silver minivan approached from behind and yelled out Kait that riding horses in the road is illegal (it is not), and then sounded his car horn. The sound alarmed Cali, who jumped into the road and was struck by the minivan.

“He slammed into the back of us,” Kait said on her facebook page. “She and I fell on the road and (the minivan) took off.”

Kait’s horse went all the way down and narrowly avoided crushing her rider, though Kait did sustain a bruised and swollen collarbone, according to ABC News 10. Cali sustained minor injuries to her hindquarters and also her rear right hoof when her shoe was loosened and lodged in the hoof incorrectly.

The police were called and are investigating the incident, with hopes of catching the man responsible.  The van is light silver, and Kait believes that her mare left a dent on the hood of the van and possibly also the passenger door while scrambling to get up. Citizens in the area are encouraged to keep their eyes open and call police if they see something matching the description.

Kaitlyn also credits her Charles Owen helmet for saving her life, as it cracked when she hit the pavement. Ultimately, Kait and Cali are the lucky ones, as many horse and riders are not so lucky as to survive an incident with a vehicle. The pair hope to be back to sound in a few weeks and continue competing. Be sure to explore the road laws in your state before heading out on your horse, and mind your melon!