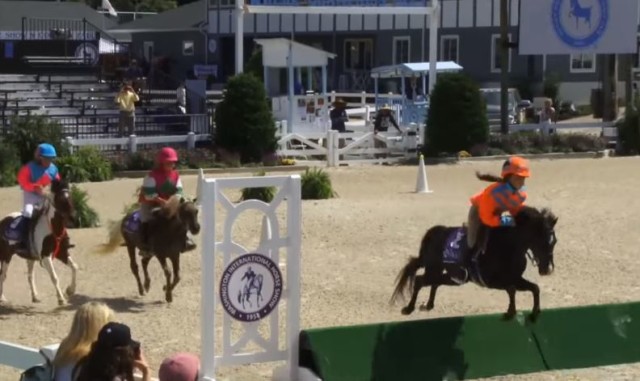 It’s so cute that it actually hurts me in the cuteness portion region of my brain and gives me a Rainbow Brite headache.

The Washington International Horse Show Shetland Pony Steeplechase Class at Devon is one of the major highlights of Junior Weekend at Devon, and frankly, it’s now the major highlight of my life. Six brave little jockeys and their noble steeds race in the blue Dixon oval at top speeds while jumping cute little hedges and flying around like fluorescent bats out of Hell.

The race was won with gusto and flair by Kiley Ahn and her trusty steed, Frosted Flakes. They were right in the thick of it for most of the race until pulling away in the end by 8 or 9 Shetland-sized lengths.

The Charles Owen Safest Ride winner was Oscar Fuery and her steady little man Hopwood’s Winchester, who came in third.

The race is part of a series which concludes at the Washington International Horse Show in Washington DC October 29, 2016. We are altogether impressed with this plucky group of ponies and riders, and give them our HN Salute of Insanity.