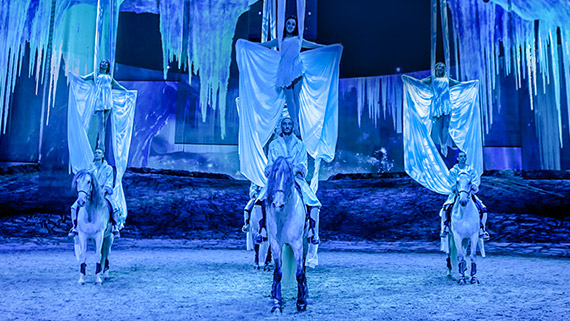 No really, you can just quit your life and join the circus! Particularly if you know a death-defying trick or two!

Earlier this year when we went behind the scenes with Cavalia, the worlds largest traveling equestrian circus show, we got hundreds of comments from people who said being a performer in Cavalia would be their dream job. Great news: It doesn’t just have to be a dream! If you’ve got the chops and you’re willing to put in the time, effort, and commitment, you can join one of the traveling troupes in North America or China.

Auditioners must be between 18-35 years old, and be willing to pick up and live on the road for several months of the year.

They are looking for three particular types of performers, but we know from talking to the current cast members that being diverse and being able to perform in multiple acts will absolutely work in your favor.

Cavalia performer Claire Beer tells us her three pieces of advice for anyone dreaming of the circus life: 1) “Don’t ever give up on it. It’s gonna be hard, it’s gonna be great, it’s gonna be awful. It took a lot of discipline but I put my time and heart into it. 2) “Be as versatile as possible, especially in this show. Learn to be an aerialist, do every equestrian discipline, dressage, jumping, liberty, trick riding…as much as you can do. And 3) “Believe that anything is possible. A lot of people think of a job like this and say ‘I could never do that’ but you can do anything you set your mind to.” Thank you for talking with us, Claire! #horsenation #odysseout

If you are offered a position on the cast, you’re going to have quite the adventure. The tour will move across the country with performances in one location lasting 2-6 weeks, depending on ticket sales. You’ll get a few days off between cities, but for the most part you’re going to be living, eating, breathing, sleeping, and adventuring with your fellow cast members — both human and equine — all day every day. So you better like your fellow performers!

Currently, Cavalia has performers from the U.S. Canada, several countries in Europe, and Africa, so you’ll meet some incredible people! You’re also the face of the company, and will regularly give interviews, meet with the press, and meet with patrons and dignitaries in every city.

Best of all, if you snag a rider spot, you’ll be spending 10-17 hours a day with your horses, who are assigned to you in the show and who you’ll create a special bond with during your tour. The cast members love their horses, and you’ll get to be part of something truly unique.

The auditions will take place all over North America through June and July. Be sure to check out the casting information on Cavalia’s site to see which dates are near you, and submit a resume and other details.