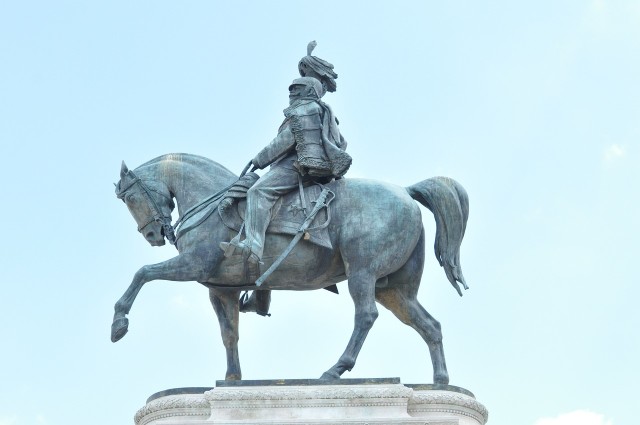 Reader Ash Stevens offers a brief history on a few famous war horses through the ages in honor of Memorial Day.

While Memorial Day is an American holiday designated to remember those who made the ultimate sacrifice, it’s also an opportunity for us in the horse world to reflect on the contributions of warhorses all over the world throughout time. The world has seen some brave and courageous fighters as well as the horses that helped make it all possible. We take a moment to look back on a few great warhorses in history.

Rumor states that this horse was acquired in Egypt and came to win the affections of Napoleon Bonaparte during the battle of Marengo. The French Emperor is said to have ridden Marengo through many fights, one of which was the famous battle of Waterloo. The horse is claimed to have been lost during one battle which led to him being taken by Lord Petre of Britain. And while there’s great doubt that the tale of Marengo has any truth, Napoleon’s famous portrait is only more striking because of it.

This battle horse was touted to be the sole survivor of Custer’s Last Stand. It’s said he began life as a wild horse that roamed the hills until he was caught by mustangers and purchased by the United States Army in 1868. The mustang caught the eye of Captain Miles Keough of the Seventh Cavalry and became his favored battle steed. After being ordered out to fight against Native Americans, the horse was hit with an arrow and was said to have given a yell just like that of the warring Comanche — and so his name was born.

After putting up a fight against moonshiners and the KKK, Comanche and Captain Keough were sent north to join the military’s offense against the Native Americans of the northern plains. This assignment eventually led to the Battle of Little Bighorn where General Custer and his five companies of soldiers met a bloody end. Not a single American soldier survived what was to be the most historic battles of the Great Sioux War,so the Army did everything it could to ensure that the horse Comanche survived his severe wounds. Upon his recovery a year later, Colonel Samuel Sturgis issued General Order Number 7 which declared Comanche free from ever again being ridden or used for work.

Said to be of Marwari breed, India’s famous blue-tinged horse was riden by Maharana Pratap against the invasion of Emperor Akbar. As the ruler of Mewar, Pratap was forced to lead a charge against Akbar’s forces. He led a fierce battle along the pass of the Aravalli Mountains that served as the entrance to Mewar. When the day was over, Pratap’s valiant effort didn’t stop Akbar’s men from taking over Mewar, but it did lead to some incredible events that allowed Pratap to live to fight another day.

It’s said that upon the day of this great battle, Pratap — the rider of the dark blue horse — rode brave Chetak into battle where they found themselves facing an enemy on elephant. The difference in size and force was clear, but Pratap and Chetak engaged without hesitation. The fight was intense and the elephant tore through Chetak’s back leg threatening to bring down both horse and ruler, but Chetak still had the power of his three other legs. As the enemy ran after a soldier wearing Pratap’s crown in a ploy to ensure his escape, Chetak carried Pratap away from the battle to safety. Chetak’s wound was fatal, but his part in this great battle proved powerful. Pratap survived thanks to Chetak and he went on to live another twenty five years which led to him regaining much of his lost dynasty and never falling victim to the hand of Emperor Akbar.

This fearless war horse with a famously-large appetite began her military career when she was purchased by a lieutenant from a young Korean boy. This little horse, named after the Marines’ “reckless rifles,” was purchased only for the intention of hauling ammunition to the front lines, but this spunky little mare became far more than a pack horse. Soldiers trained her to bypass trip wire and to drop to the ground to avoid fire. Then the fight was over she would even enjoy a beer with the guys.

During the Battle of Outpost Vegas she won a special place in the hearts of fellow Marines. She made 51 trips carrying a total of over 9,000 pounds of ammunition from supply point to battlefield. After she was freed of her load of ammunition, she would help wounded soldiers by carrying them down the mountain back to base where she would again be stocked up with more rounds. She traveled a total 35 miles that day, and nearly all of her resupply efforts were done on her own without a soldier to guide her. Even after being wounded twice, she still pushed onward. Her help in this fierce battle was as critical to the soldiers’ firearm supplies as it was to their spirits and determination, and so her fellow Marines had her promoted to the rank of Sergeant.

This legendary steed was the war horse of history’s most famous conqueror Alexander the Great. Legends claim that Bucephalus couldn’t be ridden — not even by Alexander’s father King Philip II — but young Alexander discovered he was only afraid of his shadow and so was able to climb upon his back by facing him towards the sun. Bucephalus is said to have carried Alexander through many battles which game him great devotion from the determined conqueror — so much so that Alexander named the cities of Bucephalia and Phalia in honor of him.

This stallion must have been very powerful to have been through so many wars, which made him coveted by opposing forces. Stories say that a group of Persians successfully led a party to seize this famous horse, but this effort was short-lived. Alexander was said to be so enraged at the loss of his loyal steed that he threatened to wipe out all of Persia if Bucephalus wasn’t immediately returned. The Persians obviously took the threat very seriously and so they quickly led the stallion back to the hands of Alexander.

These days horses are more likely to serve as equine physical therapists than soldiers’ steeds, but their contribution to history makes them an important part of our Memorial Day reflections. Our history is full of war heroes, human and horse alike, and they’re deserving of appreciation for the great bravery they showed in the face of fear. If you find yourself looking for an excuse to have just one more holiday drink, then these war horses make the perfect toast.

About Ash Stevens: Ash is a mother, gardener, writer, and a fan of all things green. Her love for health and simplicity began with her journey into motherhood, and it’s grown exponentially ever since. She’s passionate about living it up with gardening, cooking, an active lifestyle, and being outdoors as much as possible. If she isn’t writing or reading up on exciting green trends, she’s probably playing Connect Four or swimming in the river with the kids.