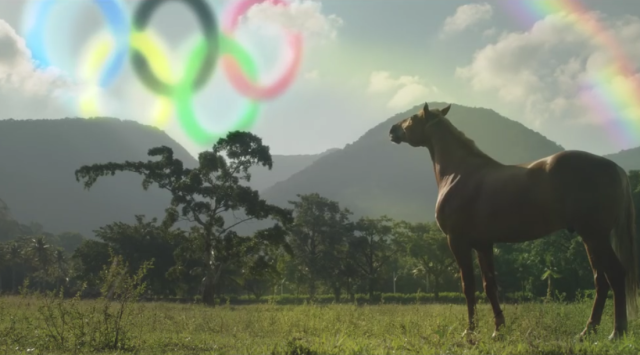 This quirky yet endearing campaign for the 2016 Summer Olympics stars a horse named Billy with an impossible dream. Let the hijinks and weird horse jokes roll.

When we said we wanted increased coverage and wider awareness of equestrian sport at the Olympic level, this wasn’t quite what we had in mind … but hey, a horse is a horse, so we’ll take it. Meet Billy, an anthropomorphized horse with Olympic dreams.

Editor’s note: Results not typical. Being struck by lightning or otherwise electrocuted is not recommended for granting your horse special powers or unique markings.

So the premise is pretty clear: Billy’s going to try all of the Olympic sports, thanks to this highly-talented equine actor (or at least some very creative video editing). And perhaps, somewhere between archery and wrestling, Billy will find his calling (like, say, the equestrian sports? Maybe? Maybe not?)

In fact, Billy already gave athletics a shot, during which he was inexplicably pulled over for speeding:

We can only guess at what sport Billy will attempt next: men’s freestyle? Greco-Roman wrestling? Sailing???

If nothing else, rest assured that Billy is here to confuse yet another generation of non-horse-people:

You can follow Billy’s adventures on the road to Rio on a multitude of platforms: