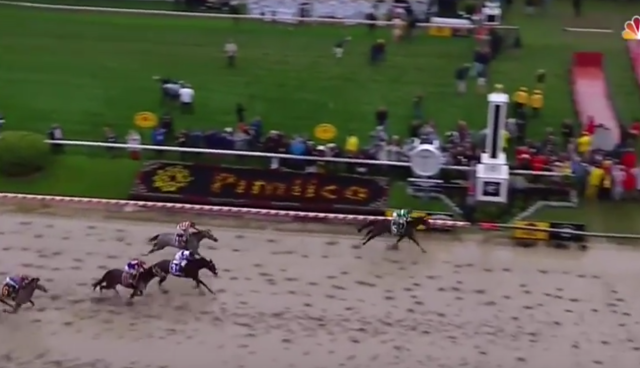 Exaggerator, second choice at the betting window, pulled off a textbook come-from-behind victory in the Preakness Stakes, conquering the undefeated favorite Nyquist on a sloppy track.

A day of steady rain soaked Pimlico in Maryland, rending the track into a soupy mess but failing to dampen the spirits of the connections of the eleven Thoroughbreds headed to the starting gate for the Preakness Stakes. The undefeated Nyquist, who conquered the field in the Kentucky Derby, went off again as the favorite with Derby runner-up Exaggerator a close second choice.

Exaggerator had already proven a liking for sloppy tracks, with a dominating performance in the wet Grade I Santa Anita Derby. Nyquist’s connections, though their colt had never run on a sloppy surface before, were confident that the undefeated juvenile champion could handle whatever surface they threw at him.

As predicted, Awesome Speed and Uncle Lino went right to the pace with Nyquist as Mario Gutierrez hustled him out of the gate. Into the backstretch Awesome Speed steadied to stalk just off the leaders, but Uncle Lino continued to pressure Nyquist with punishingly fast fractions. The field gathered on the backstretch, with new shooters Collected, Stradivari and Laoban gaining ground and Exaggerator slowly moving up on the leaders on the inside.

As the field headed into the final turn, Exaggerator was poised just behind the leading trio of Awesome Speed, Uncle Lino and Nyquist, much better-placed for his closing kick than in the Derby where he was forced to navigate around more horses. At first it appeared that Exaggerator would be able to nip right up on the inside, but Uncle Lino and Nyquist, still locked in a speedy duel for the lead, closed in on the rail.

Kent Desormeaux slide Exaggerator to the outside with Stradivari just off his shoulder as the field rounded into the homestretch, and the bay colt moved in his signature close, moving in just a few strides to draw even with Nyquist and then taking the lead. Nyquist and Gutierrez made one last try to catch the son of Curlin but faded away, Exaggerator sweeping under the wire by three and a half lengths as Cherry Wine moved in to snatch second place.

With Exaggerator finally conquering the undefeated Nyquist, the Triple Crown dreams for 2016 come to an early end. However, we’ll still be looking forward to the Belmont Stakes in three weeks!

The rider-trainer duo of Kent and Keith Desormeaux are from Louisiana but made their bones as professionals at Pimlico, so today’s victory is a special sort of homecoming. Exaggerator is owned by Matt Bryan and the Ortowski family.

Today’s day of racing at Pimlico was not as smooth as Exaggerator’s trip, with one horse breaking down in an earlier race and another horse dying of apparent heart attack on the walk back to the barn after winning his race. Full necropsies will be performed on both horses. Overall, equine fatalities in horse racing are the lowest in seven years in which the statistic has been measured; our thoughts are with the connections of these two horses.