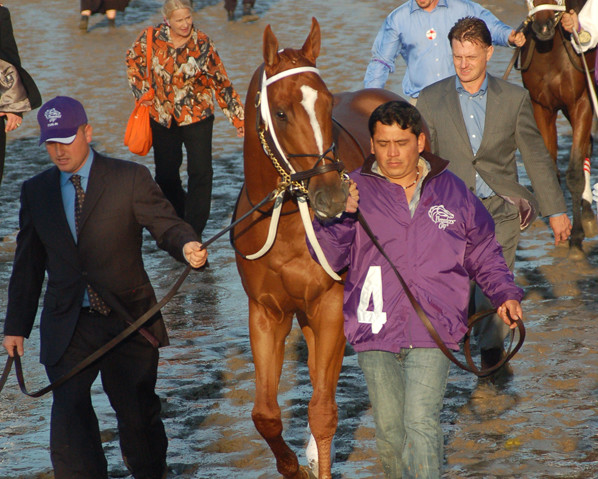 The Belmont Stakes usually gets all the notoriety for where Triple Crown dreams are shattered — but the Preakness Stakes has its own history of heartbreak. Here are 8 historic upsets in Preakness history.

Curlin at the 2007 Breeders’ Cup Classic. Curlin beat Kentucky Derby winner and favorite Street Sense in the 2007 Preakness Stakes, then went on to become Horse of the Year. Wikimedia Commons/TheBluZebra/CC.

Nothing takes the wind out of our sails faster than when our beloved Kentucky Derby winner is conquered in the Preakness — no Triple Crown anticipation to keep our hopes alive through May and June, no endless speculation about whether the apple of our horse racing eye can do the near-impossible.

Throughout Preakness history, there have been a number of upsets that spoil the Triple Crown trail way earlier than we expect — this is certainly not an exhaustive list of every time a Preakness winner ruined the Triple Crown, but we’ve listed here every time the Kentucky Derby favorite and winner has been upset in the second leg.

Our list includes runnings of the Triple Crown after 1930, with Gallant Fox’s sweep. This year was when the phrase “Triple Crown” was first commonly used.

Mate was certainly no long-shot — he and his stablemate Twenty Grand along with Jamestown and Equipoise were called “the big four” in 1930 and 1931. However, it was favorite Twenty Grand who won the Kentucky Derby in 1931, going off as the favorite again in the Preakness Stakes before a bump from Clock Tower threw off his trajectory as he tried to pass the leaders. Mate held on by half a length to win with Twenty Grand finishing second. Twenty Grand went on to win the Belmont Stakes as well as a few more major stakes to ultimately become Horse of the Year.

Challedon finished second in the 1939 Kentucky Derby by eight lengths to favorite Johnstown, who tied the record for largest margin of victory. However, a muddy track in the Preakness proved to be Johnstown’s undoing, as the horse had only ever run on fast tracks. Challedon conquered the field by a length and a half with Johnstown finishing a disappointing fifth. However, Challedon wasn’t eligible for the Belmont Stakes and Johnstown won the third jewel easily.

(Who thinks we should still have these old-school newsreel reports for horse racing? I DO.)

Needles was a dramatic late closer, who won the Kentucky Derby by moving up from 16th place (in a 17-horse field). However, the shorter Preakness Stakes at a mile and three-sixteenths didn’t give him quite enough room to catch Fabius, the Derby runner-up. Of note is that Fabius went on to run another race between the Preakness and the Belmont (the Jersey Stakes on May 26, which he won) but was conquered again by Needles in the third leg of the Triple Crown.

Maryland-bred Bee Bee Bee did not run in the Kentucky Derby in 1972; that victory went to the well-known favorite Riva Ridge (stablemate to the great Secretariat). Other strong contenders in the same age group were Key to the Mint and No Le Hace. Heavy rains on the day before the 1972 Preakness swamped the track, and Riva Ridge did not fare well in the muddy conditions — but Bee Bee Bee, apparently relishing the surface, cruised to victory. Riva Ridge went on to win the Belmont, continuing the apparent tradition of Preakness upstarts breaking the Triple Crown in the middle race.

(Do yourself a favor and watch at 7:08 to check out the amazing suit worn by the commentator. The 70s, am I right?)

This year’s Triple Crown trail is a little tougher to navigate: the Kentucky Derby had a massive field of 23 entered, and the eventual winner Cannonade was coupled with his stablemate Judger as a single entry at the betting windows. Judger appeared to be the better of the two colts, placing ahead of Cannonade in every prep race culminating in a win in the Grade I Florida Derby. However, due in part to the massive field in the Kentucky Derby, Cannonade grabbed the lead and held onto it, with Judger finishing in eighth. After this race, officials started limiting the Derby field to just 20 entries.

Little Current had a less-than-distinguished career in prep races and finished fifth in the Derby, but his luck changed in the Preakness. Going off with long odds, he managed to find a hole by the rail and launched to the lead, with Cannonade finishing third. Little Current went on to win the Belmont Stakes as well.

In a year full of standout three-year-olds, the most high-profile was the Kentucky Derby winner Foolish Pleasure, perhaps known best to history as the horse who ran the tragic match race against the filly Ruffian who broke down. Foolish Pleasure was a heavy favorite into the Derby, which carried over into the next two legs — but he was conquered by the hard-running Master Derby in the Preakness. Both horses lost in the Belmont Stakes to Avatar.

Red Bullet’s connections were selective in where they raced their colt; he did not start until his three-year-old season and skipped the Kentucky Derby. He won the Grade II Gotham Stakes and finished second in the Grade I Wood Memorial to the Derby favorite and eventual winner Fusaichi Pegasus. When these two horses met again in the Preakness Stakes, Red Bullet came out on top with a nice move between horses coming into the final stretch. Both horses ultimately skipped the Belmont Stakes.

Originally the morning-line favorite for the Kentucky Derby, Curlin went to post as the second choice to juvenile champion Street Sense, who edged out the win thanks in part to one of Calvin Borel’s famous rail rides. Street Sense headed into the Preakness Stakes again the favorite, but Curlin hung on for a thrilling and gritty photo-finish to claim the second jewel of the Triple Crown. While Curlin lost the Belmont Stakes to the filly Rags to Riches, he went on to claim many more major stakes victories as a three- and four-year-old, and was named Horse of the Year for 2007 and 2008.

Keep it locked on Horse Nation for more Preakness Stakes coverage as we wait to see if favorite and Kentucky Derby winner Nyquist captures the second jewel! Go racing, and go riding!