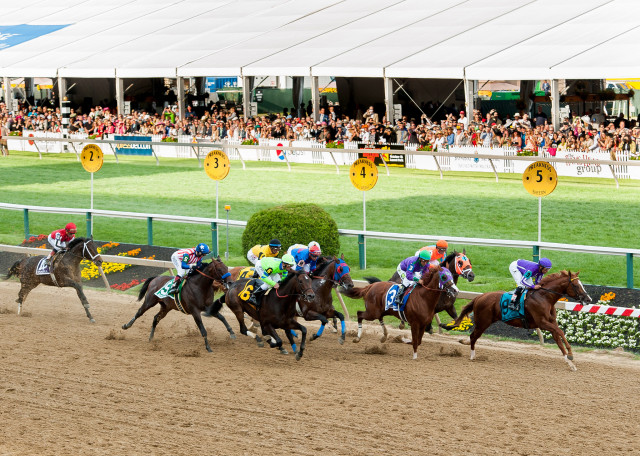 We won’t really know until tomorrow (we’re going to guess probably not) but an intriguing field full of unknowns might put on a good show for Saturday’s second Triple Crown race.

The 2014 Preakness Stakes, which was won unsurprisingly by the favorite California Chrome. Flickr/Maryland GovPics/CC

Okay, I’ll be the first to admit it — I don’t love Nyquist. There, I said it.

To be honest, I think it’s just that I’m still hung up on American Pharoah — I can’t even tell you why, just that I guess there’s something special about seeing the Triple Crown claimed for the first time in your lifetime. You almost don’t want to see it won again, so soon, as though another victory would somehow cheapen the experience of this most difficult challenge in horse racing.

So maybe I’m grasping at straws to try to find a good reason to bet against this year’s standout star, the undefeated Nyquist, trained by Doug O’Neill, ridden by Mario Gutierrez and owned by J. Paul Reddam. Nyquist has his own story, chasing in some ways the glory that evaded his sire, juvenile champion Uncle Mo, who never got to prove just how fast he might have been as in the Triple Crown due to a gastrointestinal infection that forced his early retirement. I can’t deny that the colt looks like a powerhouse, successfully putting away field after field at the highest levels of competition.

But we’ve all heard plenty about Nyquist. It’s the rest of the field I find fascinating for tomorrow’s Preakness Stakes:

This may not be the most inspiring “dark horse” to start with, but Cherry Wine drew the Number One post position and thus his place at the top of the list is set. He was listed as an also-eligible for the Kentucky Derby but did not draw into the field. His trainer Dale Romans has snuck a Preakness longshot into the winner’s circle before with Shackleford, and while the odds on Cherry Wine are long, it’s worth noting that the horse has notched a strong victory on a wet track. With rain in the forecast for Sunday, track conditions will definitely be a factor. Cherry Wine is ridden by Corey Lanerie and owned by William Pacella, Frank L. Jones Jr. and Frank Shoop.

Oh look, another Uncle Mo colt — someone’s been having a very good year. Uncle Lino rolls into Maryland coming off of a win at Los Alamitos in the California Chrome Stakes. Other than that, his other claims to fame are finishing behind Mor Spirit and Exaggerator in the Santa Anita Derby, which is maybe not too auspicious for pulling off a win tomorrow. Regardless of his chances, I’d like to think that a win by Uncle Lino is still a win for Uncle Mo, even if he upsets darling Nyquist. Uncle Lino is trained by Gary Sherlock, owned by Tom Mansor, Purple Shamrock Racing and Gary Sherlock and ridden by Fernando Perez.

Hey buddy, your name suggests that you’ve got a lot to show, but unfortunately, your record looks like you have a lot more to prove. Awesome Speed won his last start, but only by disqualification. Truthfully, most of the Preakness picks you can find out there on the internet don’t really have much to say about this horse, and I’m tempted to agree with them. Awesome Speed is trained by Alan Goldberg, owned by Colts Neck Stables and ridden by Jevian Toledo.

Now we’re talking, at least in my opinion — I maintain that if Exaggerator had either been able to shake free from traffic earlier in the Kentucky Derby, or if only the Derby were a few yards longer, we’d all be singing a different tune right now. Yes, it’s been pointed out to me several times that the Preakness is shorter, the turns are tighter, and everything else about the track is working in Nyquist’s favor — but I also believe that with a smaller field, Exaggerator has a good shot to at least make it an exciting duel down the homestretch. The colt is a late closer, so keep an eye on him around that final turn.

This horse seems to be attracting plenty of attention but more as a kind of weird side attraction as the public waits to see what kind of bizarre stunts he pulls next. This article focuses not on Lani’s talents as a racehorse but his quirks on the training track. Let’s think of him instead as some sort of misunderstood genius. I’d like to see this horse on a good day so we can really get an idea of his speed — he won big in Dubai before shipping to the United States, and if there’s anything we know about flying halfway across the world it’s that the trip takes a lot out of a horse. Lani is trained by Mikio Matsunaga, ridden by Yutaka Take and owned by Koji Maeda.

This horse did not run in the Derby, but he seems to be poised for a big race this time out. He’s also trained by Bob Baffert, which gives him a powerful resume. He’s coming into the Preakness off of two wins and a fourth in his three-year-old season, ridden by the experienced Javier Castellano. While the Derby runners coming into this race seem to be in fine form, it will be interesting to see if a fresh face can get the jump on horses who may still be slightly tired after just a two-week turnaround. Collected is owned by Speedway Stables.

What’s that? A third Uncle Mo colt? At this point, just by having three runners alone, Uncle Mo is already winning the Preakness. Focusing on Laoban himself, he doesn’t have a single win to his name yet, and the Preakness may be a tall order. However, he likes to set a strong pace right out of the gate, so look for him on the lead. His chances of winning are probably slim but think of him as a wild card who could help set the stage for closers to make a move later in the race. Laoban is ridden by Florent Geroux who piloted Gun Runner in the Derby; he’s trained by Eric Guillot and owned by Southern Equine Stable and McCormick Racing.

Guys, I’m not even joking — this colt is also sired by Uncle Mo. His odds are long as the Preakness caps an improving season in minor stakes races. Interestingly, Abiding Star was only just released to leave Parx Racing in Pennsylvania after an EHV quarantine was lifted — however, while he was there he did manage a win on May 7 in the Parx Derby. This will be his first start against the serious big guns, and while he’s not likely to win he will also probably go right to the pace under jockey J.D. Acosta. He’s trained by Ned Allar and owned by Stonehenge LLC.

The more racing I follow, the more I’m learning not to count out trainer Mark Casse. On the other hand, Fellowship only just recently was transferred to Casse’s barn, so I’m interested to see if he’s got something up his sleeve that we haven’t seen before — Fellowship himself looks like a long shot, especially considering his previous losses to horses like Nyquist and Mohaymen. He’s also been beaten by abovementioned Awesome Speed, which isn’t very promising. Fellowship will be piloted by Jose Lezcano for Jacks or Better Farm.

The outside horse breaking from post position 11, Stradivari is perhaps the most intriguing fresh face in the field. Owned by John Gunther, Michael Tabor, Derek Smith and Susan Magnier, Stradivari is trained by Todd Pletcher who is currently the leading trainer in North America. He skipped the Kentucky Derby and hasn’t faced top-notch Grade I competition yet, but in his early starts he’s demolished fields by over ten lengths. Essentially, what the colt is lacking in experience his team hopes he makes up for in raw talent — he’s been compared to 2006 Preakness winner Bernardini, who also did not run the Derby but took a lighter schedule to get to the Preakness. Stradivari, a son of Medaglia D’Oro, will be piloted by John Velazquez who needs no introduction.

All in all, while in the back of my mind I’m sensing that Nyquist will likely romp again, it’s shaping up to be a very interesting Preakness Stakes with a number of horses who could make things a little harder for our Derby champion. Keep it locked on Horse Nation for Preakness coverage throughout Saturday!