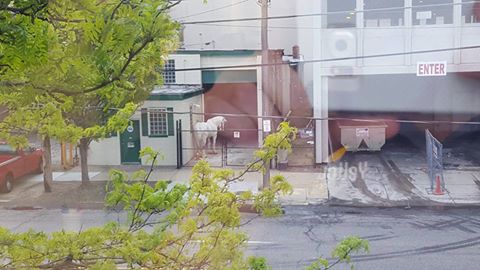 This image of a carriage horse tied up in a small yard outside a building in downtown Cleveland, Ohio has gone viral with plenty of heated emotions: is this true abuse, or a case of mistaken assumption?

The following Facebook post has gone viral in the past 48 hours with shares and comments, drawing the attention of news networks as well as a wave of support from animal lovers everywhere:

Several parts of this post hit any horse lover right in the emotional gut: phrases like “chained up” and “old auto body shop.” The image of the horse standing tied in a decidedly urban setting is jarring — what is this horse doing here? Why isn’t he in a stable, or better yet, turned out in a pasture somewhere? It’s easy to look quickly at this post and shout “abuse!”

On the other hand, there’s no manure in this tiny yard; the horse appears to be in good flesh. Many of the other indicators of animal abuse — dirty pens, malnutrition and poor coat — appear to be missing, at least from what you can see from this distant photo. Clearly, this is not an ideal place for a horse to be living, yet he doesn’t necessarily look like the typical abuse case.

WEWS News caught up with Pete Leneghan, owner and operator of Shamrock Carriage Company and owner of the horse in the image, named Lance:

Cooper claims in another news video he has seen the horse “chained up” for what he feels is a long period of time. Leneghan claims the horse is tied up outside while his stall is cleaned and then returns to the barn. Leneghan’s horses are said to be rotated in and out of the city, spending time at a farm in Lodi, Ohio for rest.

Judging from comments on social media, both on Cooper’s original post and on the news stories about this controversy, the public is divided — some are calling this a clear case of abuse (one animal rights activist called it “terrible” and “a nightmare”) and others are blaming the news media for creating a controversy where there isn’t one by fueling the allegations of abuse in the first place.

While this might not be the ideal pastoral landscape we’d like to see horses living in, with plenty of fresh air, grass and companionship, there’s no denying that this horse appears to be in excellent health in an impeccably-cleaned stable. Whether or not his work as a carriage horse in the busy traffic of a major city is ethical or not is another question entirely — but is his living situation a case of true abuse?

We invite civil discussion in the comments section — share your thoughts! While the subject of horse abuse naturally causes tough emotions, we remind our readers to keep discussion respectful.

[Is this horse being abused in Cleveland?]