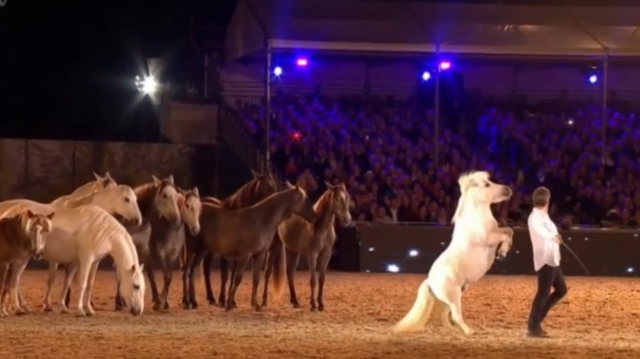 Queen Elizabeth II’s 90th birthday celebration continues: over 900 horses participated in last weekend’s massive display at Windsor, which made an international superstar out of this cheeky Shetland pony in particular!

A massive four-night celebration rocked Windsor last weekend as over 900 horses and 1,500 human participants from all over the world performed in a two-hour equestrian pageant to celebrate Queen Elizabeth II’s 90th birthday. While the actual date of her birthday was April 21, the celebrations will continue into June, with the enormous Windsor celebration one of the highlights.

Performers and their horses came from all corners of the globe, representing British territories as well as the home soil. The performances coincided with the Royal Windsor Horse Show, which already draws top equestrian talent from all corners of the globe. Undoubtedly, it was an adorably fat little white Shetland pony that stole the show, performing under “horse whisperer” Jean-Francois Pignon along with a herd of horses at liberty as Kylie Minogue sang “I Believe In You.”

Still amazed at how the incredible Kylie was slightly over shadowed by a pony. #Queens90thBirthday pic.twitter.com/byT7sZI5Vv

Every Sunday should be Shetland pony night to cheer us up before we start work on Monday #Queens90thBirthday #Shetland — SharonMarie (@SharonMarie74) May 15, 2016

You haven’t lived until you’ve seen Kylie Minogue sing I Believe In You to a Shetland pony… #Queens90thBirthday — Natalie Mott (@njmott) May 15, 2016

Adorable show-stealing ponies aside, the full program included other celebrity performances as well as a unique array of equestrian acts, featuring troops from the British military as well as international performances from Oman, Chile, New Zealand, Canada, Fiji and Australia, among others. Here are a few video highlights from the performance itself as well as the practice preparations ahead of time:

All in all, the performance looked like a night to remember, and a performance fit for Britain’s longest-ruling monarch who is a noted horsewoman. Still no word yet whether the full performance will be replayed on television broadcast or available to stream online — we’ll keep an eye out!