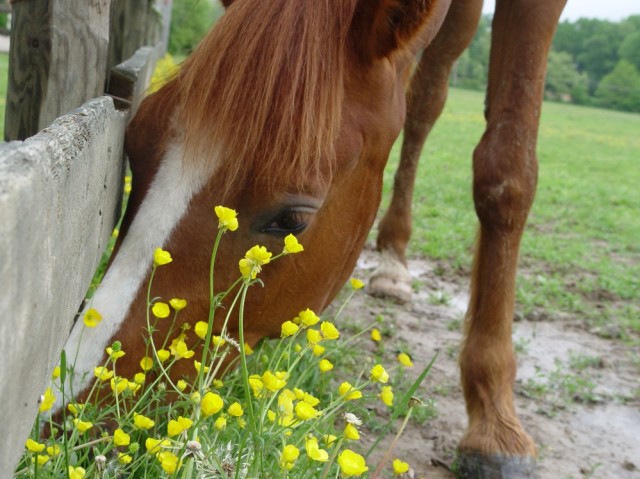 Buttercup (Ranunculus spp.), a bright yellow annual, biennial, or perennial flower found in pastures, can cause serious problems in horses that eat it as they graze. The leaves and stems of many species of buttercup contain ranunculin, a glycoside that forms the toxic blistering agent protoanemonin when the plant is chewed or crushed. This bitter-tasting oil irritates the lining of the horse’s mouth and digestive tract. Owners may notice blisters on the horse’s lips, swelling of facial tissue, excessive salivation, mild colic, and diarrhea that might contain blood. Decreased appetite and a slowed pulse may also be present. In severe cases, buttercup ingestion can lead to skin twitching, paralysis, convulsions, and death. Affected horses can display hemorrhaging and congestion in the lungs on postmortem examination. Cattle, goats, and pigs are also susceptible to the toxin.

Buttercups are commonly found throughout North America. The plant grows best in wet soils and can thrive in heavy clay and damp sand or gravel. As well as pastures, buttercup inhabits woody areas, marshes, ditch banks, and swampy meadows. It is rarely encountered on light, well-drained soil.

Horses usually avoid ingesting the bitter leaves, but when turned out on overgrazed pasture, they may eat buttercups due to an absence of other forage. Unusually wet weather favors the spread of buttercups in regions where they are not usually prevalent, and an overgrowth in pastures may lead to accidental ingestion because the plant can’t be avoided by grazing animals. Cool, wet weather also encourages the growth of desirable cool-season forages, so unless pastures are seriously overgrazed, horses should normally be able to find enough nourishment without being forced to consume buttercups.

Toxicity varies with plant age, growing conditions, and freshness of foliage. Plants are most dangerous in early growth through the flowering stage (April to August for various species). Hay containing dried buttercup foliage is not thought to be harmful because the toxic oil evaporates quickly after the plants are cut. Buttercup seeds contained in hay can fall to the ground, allowing the plants to become established in new areas.

The genus Ranunculus includes about 2000 species, of which more than 20 are found in North America. Appearance and growth habits vary, with some plants hugging the ground and others reaching a height of two feet or taller. Buttercups can have either regular or irregular flowers with three to fifteen sepals and zero to 23 actual petals; most flowers are bright yellow with a waxy appearance, though some are red, orange, or white with yellow centers. Stems are generally hairless and leaves are often deeply divided into three lobes. Some species of buttercup don’t resemble the classic yellow-flowered variety, while several harmless weeds are somewhat similar in appearance.

Horse owners who are not sure how to identify buttercup in their fields should ask the local agricultural extension agent for assistance. The agent can also suggest the control method (tilling, spraying) that will be most effective in ridding pastures of buttercup. Unchecked, buttercup can crowd out other plants, spreading to cover as much as 40 square feet of ground in a year. Creeping buttercup also depletes potassium in the soil, making this nutrient less available to surrounding plants.

Cattle and possibly other livestock occasionally develop a taste for buttercup, consuming it with fatal consequence in preference to other available forage. For this reason, it is safest to keep populations of buttercup under control on grazed pastures and offer plenty of healthy forage. Farm managers can discourage invasions of dangerous plants by following a sound pasture management program. A healthy growth of desirable grasses and legumes can be supported by regular soil testing, liming, and fertilizing combined with good grazing management and mowing.

Article reprinted courtesy of Kentucky Equine Research (KER). Visit equinews.com for the latest in equine nutrition and management, and subscribe to The Weekly Feed to receive these articles directly (equinews.com/newsletters).