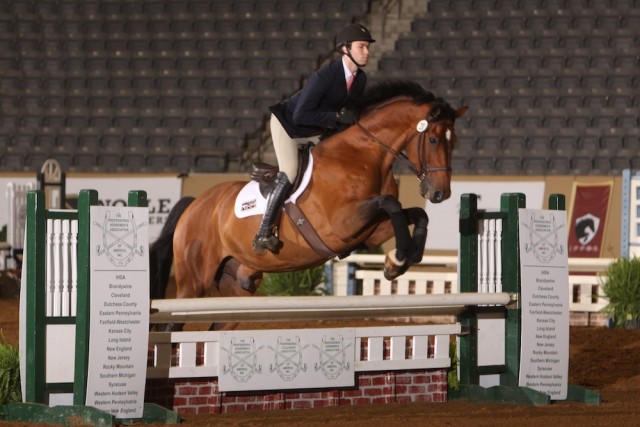 Fairfield, CT — (May 13, 2015) – To watch Tufts University senior Chase Boggio ride is to see the next generation of greatness in the making. The 2016 USEF Cacchione Cup champion opened his week at the Kentucky Horse Park for the Intercollegiate Horse Shows Association (IHSA) National Championships with a win in Individual Open Fences and never stopped his chase for the most prestigious individual college riding title in North America until the last stride of a last work-off Shakespearean in its proportion: To simple, or to flying change?

That was the question put by judges Carole O’Brien and Julie Winkel before powerhouse callbacks Boggio; Victoria ‘Tori’ Bauer, of 2015 Cacchione Cup-winning coach coach Bob Story and the College of Charleston; and Ryan Genn of the Collegiate Cup-defending Bees of The Savannah College of Art & Design.

Their courses were by USEF R designer and Johnson & Wales University graduate Tom Hern, Jr., who said his intent was to offer “interesting options based on the horses,” like his IHSA Fence into a rollback over a straight line.

That Tufts University had not seen a Cacchione Cup win in 30 years (since 1986, by future US Olympic Show Jumping Gold medalist Peter Wylde) didn’t add any pressure, no sir.

Boggio’s equitation over fences draw was Miami University of Ohio’s Carco, a 16.2hh bay called a “great draw, ride leg to hand, very adjustable.” Adjustability would become very differently defined with Boggio’s final draw, Aram, a 17hh bay gelding from Saint Lawrence University known back at the gate as “a more sensitive ride than he appears.”

It would take every inch of Boggio’s long legs and every ounce of horsemanship to answer this final work-off’s questions, including cantering a serpentine the length of the Alltech Arena while demonstrating flying or simple changes.

“I liked my draw but he was a little greener so I chose simple changes and made it up in the hand gallop. It helps,” he grinned, “to have long legs.” Parents Nancy and Scott Boggio were on hand for a timely Mother’s Day gift, much like three years earlier, when their son won his first grand prix on Father’s Day.

Boggio’s first coach, Christina Schlusemeyer, was there to echo her longtime student’s conservative approach to Aram’s leads: “We broke the serpentine into four exact pieces, and he stayed deliberate and composed riding each quarter, each simple change, one at a time. We did our part right and he made it happen. Plus a fabulous hand gallop.”

USHJA President (on leave of absence) and USEF Interim CEO Bill Moroney observed, “Chase is a fabulous rider and a great example of the quality of training and degree of enthusiasm Intercollegiate brings to its programs.”

Boggio graduates with a degree in Economics and International Relations, having served for two years as captain of the Tufts University IHSA equestrian team and as its treasurer. He has accepted a position with an Atlanta (GA) management firm and will start in July.

“IHSA was so good for him,” said his parents. “He made the commitment and was all in.”

Chase Boggio embraces his mother, Nancy Boggio after being named the 2016 Cacchione Cup winner at the 2016 IHSA Nationals on Saturday at The Kentucky Horse Park. Photo by Erin O’Neill.

Accepting the EquestrianCoach.com Achievement of Excellence Award for a $500 stipend and internship with Stacia Madden, and reserve in the USEF Cacchione Cup, was Victoria Bauer for the College of Charleston and coach Bob Story, who also coached last year’s Cacchione champion, Elizabeth Hayes. “This week was about riding my personal best. I’m grateful to my friends and family and most importantly to Coach Story for his hard work helping me get ready for Nationals,” said Bauer, who had three generations of matriarchs cheering her on, including her 97 year-old grandmother, Yvonne, who never doubted her granddaughter would not live up to her “victorious” name.

“I’m proud of her,” said Story. “Of course I wanted back-to-back wins because it hasn’t been done in so long (1982-1983, CeCe Williamson, University of Virginia) but she was wonderfully consistent. Weak points? Tori doesn’t have any weak points.”

Ashley Henry, coach of The Savannah College of Art & Design 2015 national champion team had to confess that okay, maybe plans to start a family were built (just a little) around defending their high point team Collegiate Cup title in 2016 and, like a good over fences round, she hit all her marks. The SCAD Bees came to Kentucky having won eight out of nine IHSA shows and anchored in their focus by senior captains, Ryan Genn and Devon Walther.

“Devon and Ryan have been upper level, educated riders that stay focused and never forget that it’s not over as long as there’s still classes. This has been an amazing team that has worked endlessly. All we’ve tried to do is stay humble,” said coach Henry, whose next “Trip” after Kentucky is a baby boy expected in mid-June. “We planned it out, after Nationals,” she blushed. And over baby’s crib… that Collegiate Cup?

Nationals were proud yet bittersweet for Collegiate Cup reserve team coach, CJ Law, and her Mount Holyoke College Lyons. Joined by alum of the 1986 Collegiate Cup team, the Michelle Cook Trophy to the national Walk-Trot champion was retired to the USHJA Wheeler Museum, not far from the pinks of US Olympic Show Jumping Gold medalist Bill Steinkraus. The trophy remembers the spirit of a young IHSA rider whose future was cut short by a drunk driver.

“Michelle would have been amazed by this. She loved horses and riding,” said Law, who also had praise for her 2016 reserve national champion team captain, Bridget Finnerty. “She knew the stakes. She had a plan going into Nationals.” As did sophomore Sabrina Fox, whose Collegiate Cup Walk-Trot-Canter win sealed the deal on the reserve championship for the Lyons after a winning season of seven shows, a Regional title and a Zone 1 reserve.

With maybe a little help from above. “I’m superstitious,” said Law. “My son, father and father-in-law are named James. When Bridget drew a horse by that name (Centenary’s 16.2 grey with a “big stride under a soft hand”), I think Michelle was smiling down.”

For a second time, Anna Knowles of Dartmouth College won the Theresa L. McDonald Scholarship Challenge sponsored by EQUUS; Miami University of Ohio coach Lori Cramer received the Lifetime Achievement Award and was joined by the IHSA 50th Anniversary Committee in unfurling a new Gold Anniversary logo and “50 years in the saddle and striding forward” 1967-2017 motto and banner during Saturday’s awards.

IHSA’s 50th anniversary logo is unveiled on Friday afternoon at the 2016 IHSA Nationals at the Kentucky Horse Park. Photo by Erin O’Neill.

“It’s the love of the sport that drives us,” said Grand Valley State University’s Michelle McDowell after learning she had won this year’s AQHA High Point Western Rider award at the IHSA Nationals 2016, May 3-5, in Lexington, KY. Grand Valley State, which does not offer an equine program, produced the top Western college rider in the nation, but not without giving thanks to a little help from its friends.

“It’s a big deal for a school without an equine program to win this. I’m so grateful to my team. We worked so hard. I’m grateful for the help from Lori Arthur and Saginaw Valley and for those here in spirit. It’s the love of the sport that drives us every day,” McDowell said before remounting for her first official photo as new national champion. A past president of MQHYA and current MQHA member, McDowell also shows a mare, MillionDollarDetails, in hunter under saddle and hunt seat equitation.

Respect for horsemanship was mutual between the new champion and Saginaw’s Arthur: “This is well deserved. She’s worked hard and I’ve been rooting for her all year.”

There was a more robust than usual cheering section to announcing the AQHA High Point Team. Or teams (plural) as overall scores would prove, with six teams seeded within three points of one another and the top two teams sharing an AQHA Team trophy and title for the first time since 2003 (West Texas A&M and Texas A&M Universities) as three-time national champion Berry College and coach Margaret Knight joined first-time title holders, St. Andrews University and coach Carla Wennberg.

“Last year and this, it was down to the wire. Our coaches are best friends so we couldn’t have tied with a better team,” said Berry team captain, Elizabeth ‘Possum’ Poczobut.

“I love Coach Wennberg,” said St. Andrews team captain Kara Copeland, a senior majoring in Psychology. “She inspires us to put 110% into ourselves and each other. Teamwork carried us through.”

Teamwork and friendship. In expressing gratitude for the camaraderie shared between coaches at both colleges Copeland added, “Berry gave our SAU team a clinic and worked individually with everyone to improve our Western Horsemanship and Reining. It was an amazing experience.” Sharing knowledge turned into sharing one of the most honored team titles in college riding.

Coach Wennberg was also recognized with the 2016 IHSA Western Coach Sportsmanship Award for her work as “a teacher who positively reinforces her riders, makes sure her team is prepared, and is always ready to help others.”

For the top four finalists in the NRHA Open Reining national championship at IHSA Nationals, there will be no time to slide back on their laurels, having qualified for the June 30 NRHA Collegiate Reining Championships in Oklahoma. Earning the honor, following the decisions of Western judges Gretchen Mathes and Kim Myers, to represent IHSA in Collegiate Reining are Leah Piper (Middle Tennessee State University), Kelsey Wilson (West Texas A&M), Sarah Yu (Ohio State University) and Dylan Dombrowski (Cazenovia College), who accepted the 2016 IHSA Nationals Western Rider Award as a team player known for “fairness to horses inside and outside the pen.”