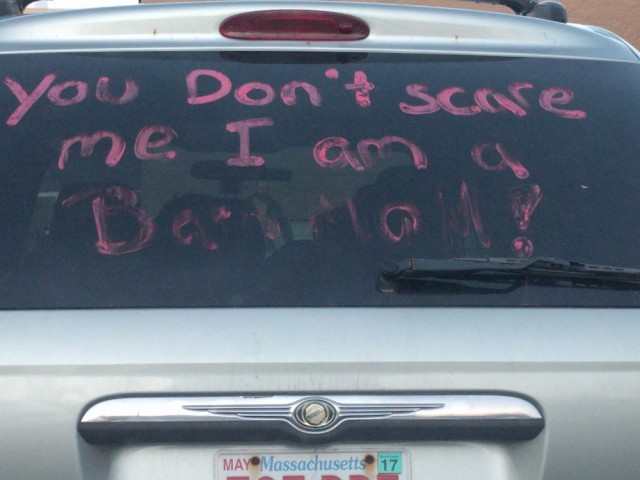 Dirty clothes and hay in the hair aside, there are more subtle clues.

Reader Aradia Diane Willard submitted the above photo with the following story: “I saw this van outside of my local grocery store, and the owner saw me taking pictures. He laughed, opened the van door to put his groceries inside, and out spilled a water bucket, a longe line, and a pair of bell boots. It looked just like MY van! The letters are fading, but it says ‘You don’t scare me, I’m a Barn Mom!'”

Much like, say, the magical world of Harry Potter, we equestrians may do our best to “mainstream” as much as possible. I’m sure you’ve seen the internet cartoon on “how to spot an equestrian” including horse drool marks, hay in the hair, smudges everywhere and filthy boots — but let’s also be honest, we do shower, we do change our clothes and we do have other social functions from time to time that don’t take place at the barn or the show grounds. However, there are a few key methods to identify the equestrian, even if they’re going as Muggle as possible:

Case out the parking lot. Dually trucks are a pretty good giveaway, but also be on the lookout for bumper stickers and a general amount of grime on more casual vehicles. (The above minivan is a great example, window paint aside.) If you can peer into the backseat without looking like a total creeper, take note of things like bags of feed, tack, buckets and loose bits of hay.

Pay careful attention to the accessories. The mainstreaming equestrian probably won’t be wearing tall boots and breeches or a trophy buckle to a social event (that’s not to say they won’t ever, but for the sake of today’s discussion, let’s assume this is a semi-formal occasion). The revealing accessories may be subtle, like a bangle or ring in the tasteful shape of a polo mallet or snaffle bit, or a belt in Baker plaid.

For that matter, look at the apparel itself. You can catch equestrians in the store or in the gym even if they haven’t come straight from the barn if you look closely for logos. Equestrian apparel companies have done a brilliant job of making barn coats that don’t look like the quintessential, well, barn coat: they’re fitted in flattering colors, but still tough as nails. The same goes for workout clothes: you’ll have to look pretty carefully, but you’ll be able to find the little horse logo that betrays the fact that the person killin’ it on the treadmill next to you is also an equestrian.

Check out the tan lines. If the face and arms are tan and the legs and hands are pale, you’ve definitely found someone who spends a lot of time outside. This in and of itself is not necessarily proof that you’ve found an equestrian, but you’re definitely on the right track.

Shake their hand. There will be telltale calluses on the palm and between certain fingers, and a certain gentle strength in the grip — the sensation that this person could grab your hand for dear life and never let go, yet also be as soft as if they were holding a baby bird. Fingernails will be kept to a practical length.

If all else fails, say one of the following words loudly to see if you can pique the equestrian’s attention from across the room. Because all equestrians have superpowers when it comes to picking up on the totally arbitrary words “Thoroughbred,” “dressage,” “gooseneck,” “second cutting,” “Coggins,” “hunter” or “hoofpick.”