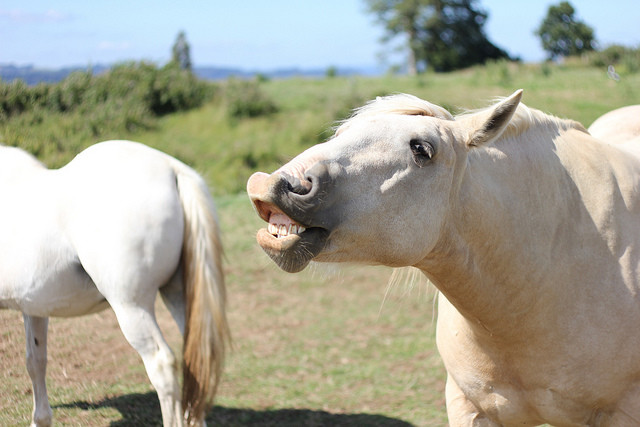 Horse Nation is so proud to say / that we’ve worked on these poems all day / to make readers smile / (at least for awhile) / because that’s the Horse Nation way.

Happy National Limerick Day! This “holiday” is celebrated annually on May 12, which according to the National Day Calendar is the birthdate of Edward Lear, a British poet, illustrator, author and artist. Lear is best known for his limericks, those sing-songy five-line nonsensical poems (such as the one in the headline above).

(For a quick review of the limerick, check out the Wikipedia page that details the rhyme scheme.)

Without further ado, here are our equestrian limericks penned in honor of National Limerick Day. We invite you to write your own in the comments section!

Equestrians don’t ask for much–
it’s the horse that needs all of this stuff.
Your budget’s a joke,
he’ll make you go broke
With the feed and the vet bills and such.

I entered the arena at A
and told myself “this is our day!”
Then my horse saw the judge
and there’s no way to fudge
that we jumped the rail, then ran away.

When I thought my day couldn’t get bluer,
I stepped in dear Cache’s manure.
Then I thought about SmartPaks
and his other good grass snacks,
and realized that nothing was purer!

My pony has suddenly gone lame
which I find to be truly a shame.
How did he know
we were about to go show?
Well, on him I will not place the blame.

Again, my horse threw a shoe,
And I’m not quite sure what to do
Other than pour a stiff drink
And try not to think
About how my wallet will see this one through.

I spent my rent money on this mule.
I found him on Craigslist — I’m a fool.
Away he has ran:
that sure wasn’t the plan.
Now I’m broke and I feel like a tool.

There once was a horse off the track
whose coat was a beautiful black.
But if you should try
to go for a ride,
he’d buck you right off of his back.

I ride a cow pony named Red
whose brain is too small for his head.
He’s not very smart
but he’s got a good heart
and he follows wherever he’s led.

Your turn, Horse Nation! Write us a limerick in the comments section. And go riding!