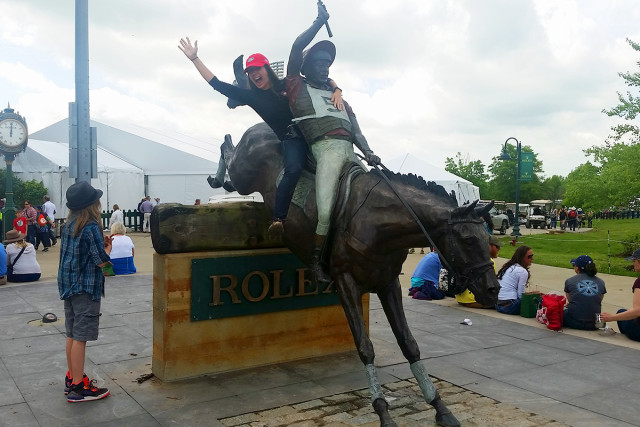 With her first trip to the Rolex Kentucky Three-Day Event under her belt, Ainsley Jacobs shares her tips for future first-timers —  as well as the big lesson she learned while browsing the vendor village.

The closest I’ll ever get to riding at Rolex. Photo by Erik Jacobs, P.TEN Marketing

When I was little, I spent countless hours parked in front of the TV watching any and all equestrian-related coverage I could find. My best friend, Alana, and I would park ourselves on the floor just inches from the screen and dream of someday riding with the greats like Ian Millar, Hap Hansen, Bruce Davidson, and so many others.

I had idealistic goals of someday riding in Rolex, or jumping at Spruce Meadows, but, as I got older, I realized that those dreams, while still (eventually) obtainable, just aren’t realistic at this point in my life. If I couldn’t ride in Rolex, though, I could at least still go and spectate!

Cue my awesome barn family from Go With It Farm: my trainer, Halliea, organizes a huge group trip each year, and this was the first time I was actually able to attend as well! Let the shenanigans begin!

On Wednesday, I drove from Atlanta, Georgia to Lexington, Kentucky with my husband and my friend Sarah. We were all Rolex rookies and had no clue just how much fun we were about to have.

Thursday morning we arrived bright and early at the Kentucky Horse Park to watch dressage. The horses were stunning and I was studying the riders’ cues as if I were getting ready to take a college final – I wanted to capture some of their magic and be able to bring it home to my horse!

• DRESSAGE TIP: Rent a headset so you can listen to the experts’ commentary of each ride.

After, we took a walk through the vendor village and stopped at many of the tents checking out sales and swag. Somehow, I stumbled upon the Kent Nutrition booth that was hosting Jimmy Wofford for an autograph session. I scored a copy of his book, Modern Gymnastics, which he signed to “Ainsley and JJ” – cool! Despite the (awesome) distractions, I had a mission in mind: I was hoping to buy a jump saddle for JJ so I could stop using his old lesson saddle that is way too big for me.

I stopped by a few booths and sat in tons of saddles. Some felt good, some felt awful, and then … then, I found the CWD booth and sat in a used Antares monoflap and it was like my butt had been waiting its whole life to find that saddle – it was heaven! It fit me perfectly, and two individual CWD reps assured me that it was in fact a wide tree and would likely fit my marshmallow-shaped horse. I even brought a tape measure with me to make sure the numbers matched up to his old saddle, but they told me not to bother. After much convincing, because I was skeptical that the saddle did not appear wide enough, I decided to trust their advice and handed over my credit card. I was so thrilled to have such a lovely saddle!

• SHOPPING TIP: Start early! In-demand items will go fast and you may be out of luck if you wait too long.

On Friday, we opted to skip Rolex completely. Instead, the ladies in our large group of 20+ dressed up, donned floppy hats, and headed down to Keeneland for a day at the races. I grew up in New York near Belmont and Aqueduct, so it wasn’t a new experience for me, but I still always get a thrill out of watching amazing Thoroughbreds fly down the home stretch as they fight for the finish, mere headbobs separating the winner from the wisher.

• RACING TIP: Go early to catch the horses breezing in the morning, then have breakfast at the track.

With two days of fun already behind us, we awoke on Saturday ready for the main event – CROSS COUNTRY! I was ready to watch the pros. I was ready to cheer on riders who I’ve spent my life idolizing. I was ready to feel like my beginner novice and novice jumps were ground poles by comparison. I was ready to be inspired!

Our group had gotten a tailgating spot, ironically located right across the aisle from our friends at Eventing Nation! It started raining practically the moment we arrived, but we were well stocked with ponchos, rain boots, and attitudes that could not be dampened despite the weather. We had a fantastic view of the (terrifying) Land Rover ditch-and-wall jump, as well as decent views of two others, and I installed myself in a chair to watch the first horses and riders come through.

After I had gotten my fill of “OMG I’M FINALLY HERE AND IT’S HAPPENING”-ness, my husband and I ventured out to watch other jumps along the course and cheer on the riders as they came through. To say I was impressed does not even begin to cover how astounded I was by the true talent and partnerships these pairs demonstrated. From the Head of the Lake to the finish, in pouring rain and sloppy footings, my expectations were not met – they were exceeded. If I ever wind up riding even a fraction as well as these folks do, I’ll die happy.

• CROSS COUNTRY TIP: Listen for the whistles – they’ll let you know when a horse is about to appear.

The forecast looked fairly decent for Sunday’s stadium jumping, and after scouring the vendor village for more last-minute bargains, we took our seats in the bleachers. What blew my mind the most wasn’t the size of the jumps – yes, they’re large – but how much heart the obviously tired horses had as they tried their best to go clear. Rails came down, time penalties were tacked on, awkward distances were managed, yet everyone who crossed the finish line was a winner as far as I was concerned. Do they give out ribbons to fiftieth place? They should!

• STADIUM JUMPING TIP: You get such a better/closer view from the bleachers! Skip the grandstands!

With a 6+ hour drive ahead of us, and work obligations looming, we unfortunately had to leave just before the event finished up and Michael Jung earned his astounding second consecutive win. I usually fall asleep on road trips almost immediately after we get on the highway, but I was so pumped from having had such an incredible time at Rolex that I was wide awake all the way home.

Post-Rolex Monday, not gonna lie, sucked just a little. I had to be a responsible adult and catch up on work when all I wanted to do was to go to the barn, see my boy, and see if the new saddle was a keeper! I had to wait until the next day to visit JJ, but I made up for being away for a week with several treats and lots of attention.

Then came the moment of truth – it was time to try JJ’s new saddle on him. I tied him in his stall and carefully hoisted our expensive new toy onto his back. After such an awesome week, reality came crashing back down: the saddle didn’t fit. Not at all, not even a little. Super disappointed, I hauled it back home after I rode (another horse, as JJ is still down with his mystery lameness that the vet hasn’t been able to figure out).

I contacted Antares to see if they could confirm what tree was actually in the saddle, and their rep, Ashley, was super helpful. Lo and behold, it wasn’t the “wide” that CWD sold it to me as – it was actually a medium tree that had been narrowed even more with extra reinforcements. I was told it was suitable for a slender Thoroughbred, the exact opposite of my broad-shouldered cow horse.

Next, I contacted CWD. I had the saddle on trial with the idea that if it didn’t fit, I’d ship it back at my expense. That’s totally fine and a logical expectation. However, as I was sold a saddle that was not what it was promised to be, I requested CWD cover the return shipping to make up for the misrepresentation. At first, they were not willing to do so, but I forwarded an email from Antares confirming the “not wide” tree, along with a photo showing the “not wide” measurements, and they finally sent me a pre-paid shipping label to return the saddle. I was exceptionally frustrated with the situation at first, but pleasantly surprised they were willing to make it right.

All in all, I learned a LOT at Rolex and I’m already making plans to go back next year! Hopefully I’ll have a jump saddle for JJ by then.

• A small backpack with built-in hydration system – Easily carry your freebies, swag, and other great finds without having to haul around a water bottle, too!
• Hiking sneakers – They’re lightweight, comfortable, and provide great support for all the walking you’ll wind up doing.
• Leggings/yoga pants – Usually I despise the idea of “leggings at pants”, but it’s totally okay for Rolex. If it’s hot/humid, you’ll be happy you’ve got stretchy, comfy pants while you rack up miles on your steps counter!
• Rain poncho – April showers are unpredictable, so stow a handy rain poncho in your backpack and you won’t regret it.
• Portable battery pack – If your cell phone can’t handle the all-day demands of snapping pictures, making your friends jealous via social media, and searching for service, pack extra power.
• Fanny pack – Not a joke! Bring back the ’80s and forget having to lug around a bulky purse (or worse, setting it down while you try on some new boots and forgetting to pick it up). A fanny pack is the perfect hands-free way to carry your credit card, cash, ID, phone, and chapstick.

Seeing is believing. If anyone tries to talk you into a purchase that you’re unsure of, make sure you get (and confirm) the facts – even if that means calling the manufacturer or measuring for yourself – before you let them charge your credit card!