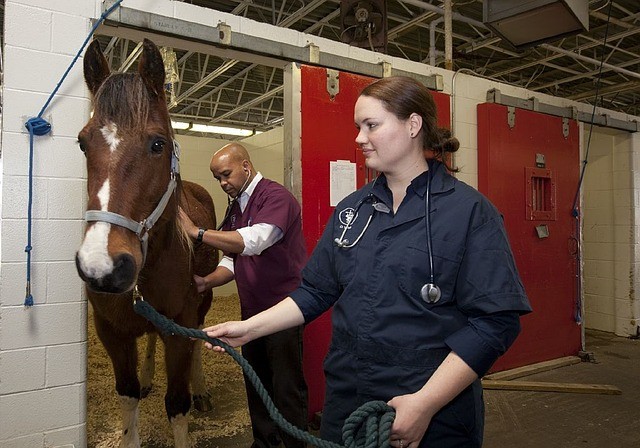 Although extremely rare, horse to human disease transmission is possible.

Rabies is found in somewhere between 40 and 50 horses annually, making the disease extremely uncommon. Still, it is very fatal and often difficult to diagnose. Rarely is there an obvious bite wound, so veterinarians often look for signs of colic, vague lameness and neurological problems. Rabies is transmitted from horses to humans via saliva. Any small cut can serve as an entry point for the virus.

This disease is caused by a highly infectious bacteria that can cause abortions in mares. Handling the aborted fetus can pass the bacteria to a person.

Anthrax is caused by a highly infectious spore that can be passed to humans via direct contact with a lesion on the infected animal or be inhaled if the spore becomes airborne. Higher incidences of anthrax occur in Arkansas, South Dakota, Louisiana, Missouri and California.

Glanders is caused by the bacteria Burkholderia mallei. The disease is fatal in horses, donkeys, mules and humans. Though the disease is commonly contracted by touching contaminated nasal discharge, the animals usually present with a cough that can contain airborne bacteria. The use of masks is highly recommended around any horse with a fever and cough.

Caused by highly invasive bacteria Leptospira, Leptospirosis is the most widespread zoonotic disease in the world. In horses it causes severe eye inflammation, abortions and renal disease. It is transmitted through infected urine, but also contaminated water and soil. It can enter humans through even minor skin lesions and can result in death.

Eastern, Western, St. Louis and some subtypes of Venezuelan equine encephalomyelitis can affect humans, causing flu-like symptoms and central nervous system distress. In this case, both mosquitoes and horses are a vector for human infection. Direct disease transmission occurs through handling infected blood and cerebrospinal fluid during post-mortem examination, so veterinarians are at a higher risk for infection. Deaths can occur in young children and the elderly.

Staphylococcus aureus is a bacterium found in skin wounds and the respiratory tract. The potentially serious infection has been found in veterinarians, farmers and equestrians. “In a study at the University of Utrecht in the Netherlands from 2006 to 2008, 43 percent of all horses that entered the hospital clinic, for whatever reason, cultured positive for MRSA at some point during their hospital stay. Over 9 percent of horses were carriers based on positive cultures done when they first arrived at the clinic, and 15 percent of hospital employees who handled equine patients were also identified as MRSA carriers.” – DVM360

This disease causes respiratory and neurologic disease in horses and humans and was first found in Australia in the early 1990’s. It causes respiratory infection, neurological disease and death in quick succession. Three cases of human infection have been diagnosed, two ending in fatality. After being exposed to infected body fluids, the patients suffered severe flu-like symptoms.

To put it bluntly, all of these cause diarrhea. Fecal-oral transmission is the primary cause of zoonotic spread. When dealing with sick horses wear gloves, change clothes after handling affected individuals and wash hands frequently. It also goes without saying that you shouldn’t eat with dirty hands if you’re around a potentially sick horse. Giardia is particularly nasty as it is parasitic in humans.

This fungal infection is easily transmitted from horses to humans. Gloves and frequent hand washing are recommended when dealing with any possibly infected skin lesion.

Many of these diseases can also be spread from horses to your barn dogs, so be extra careful what Fido sniffs, licks and eats when a horse is sick.

Author’s Note: The original version of this article stated Lyme disease, EGE and HGE could be contracted via your horse. In reality, all three of these diseases are transmitted through ticks. Horses can certainly be a host for infected ticks, but it is the tick that actually transmits the disease. Thanks for the correction, Sarah!