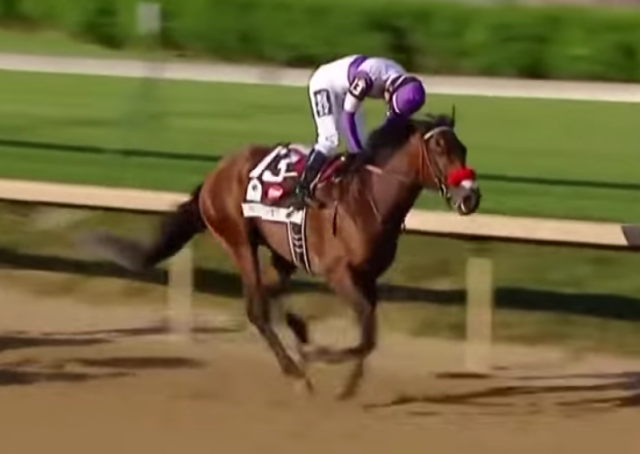 Going off as the heavy 2-1 favorite, Nyquist lived up to his hype in the 142nd running of the Kentucky Derby, pulling off a beautiful race to cruise home a length and a quarter ahead.

Danzing Candy, winner of the San Felipe Stakes, battled his way to the lead from the outside post position 20, setting speedy fractions as Nyquist and Gun Runner settled just off the pace. This leading pack blazed its way down the backstretch, Danzing Candy still cruising easily in the lead, until the far turn when Gun Runner overtook the tiring dark bay.

Nyquist, with jockey Mario Gutierrez aboard, waited just a moment longer, letting Danzing Candy fade into the rearview, and then pounced, the undefeated champion unfolding as they turned for home, easing into the lead and then widening the gap into the final furlong.

Exaggerator made a strong bid, picking his way around a majority of the field to make a flying leap at Nyquist — but he wasn’t soon enough to catch the favorite, who flashed under the wire ahead of Exaggerator. A fading Gun Runner managed third.

Many racing fans were concerned to see the final results, showing Shagaf — who at one point early in the race was as high as fourth — as a “did not finish.” Jockey Joel Rosario reported that the horse felt very tired and pulled him up; they walked off the track. Shagaf is not reported to be injured; the decision to pull up was by Rosario in order to save his horse. (Replay the race above and you can watch Shagaf fading badly through the field; around 1:45 before he’s out of the frame entirely you can see Rosario pulling him up.)

Trainer Doug O’Neill, last in the Derby winner’s circle with I’ll Have Another, looks forward now with owners Reddam Racing LLC to the Preakness Stakes at Pimlico, where Nyquist will likely appear again to defend his perfect record and for a chance at claiming a second Triple Crown jewel.