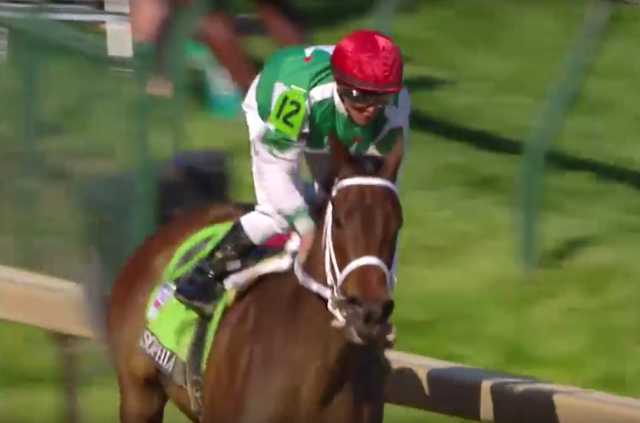 A relatively late decision in mid-April to enter Cathryn Sophia in yesterday’s Kentucky Oaks paid off in spades for her connections, as the filly motored under the wire almost three lengths in front. Check out the replay!

A record crowd of 124,589 gathered for the Kentucky Oaks, the crown jewel for three-year-old fillies on the American racing calendar. While the heavy favorite, Rachel’s Valentina (out of fan-favorite champion mare Rachel Alexandra), may have disappointed, that record crowd still got a heck of a show.

Terra Promessa jumped right to the lead, followed closely by Rachel’s Valentina and Lewis Bay, with Cathryn Sophia stalking the leaders just behind to bide her time. The rest of the fourteen-filly field was ranged out behind.

At the quarter pole, Lewis Bay crept through an opening on the rail while Cathryn Sophia started to move on the outside, going four-wide with Terra Promessa and Rachel’s Valentina who finally tired. Cathryn Sophia surged with nothing but open track before her, pulling away to a two and three-quarter length lead.

As often happens in horse racing, it was an ever-changing set of circumstances that brought Cathryn Sophia to this point in the first place — after her first-ever defeat on April 9, trainer John Servis thought she would never be a route runner over two turns. The original plan was to run the filly in the Eight Belles, a Grade 2 undercard running on Oaks day over 7 furlongs.

However, when connections of the blazing-fast Songbird announced in mid-April that a fever would take her out of the running for the Oaks (she has since recovered and is returning to training happily) Servis and the Cash is King partnership that owns Cathryn Sophia decided to change the plan. And that plan certainly paid off.

With an exciting Kentucky Oaks under our belts, the stage is set for a thrilling Kentucky Derby this evening. Keep it locked on Horse Nation for a race recap this evening!