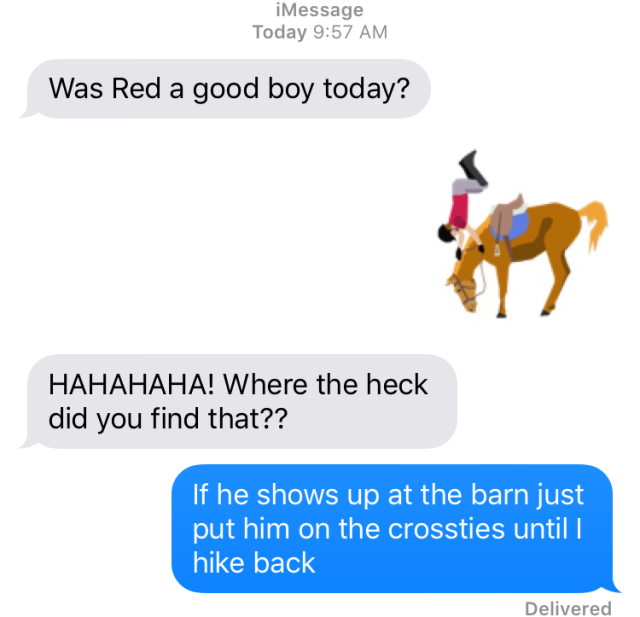 Yes, there’s an app for that.

As one of my former students said to me when I first got the iPhone, “oh good! Now you can use emojis! That’s the best part of owning a smartphone!”

A couple of years later, I have to admit that she was partially correct: those little smiley faces and icons, when properly applied, can add a bit of extra emotion or humor to your text messages. But let’s also state for the record that the selection of emojis for equestrians is shockingly limited: there’s a grand total of three horses available on the emoji keyboard, and one of them is clearly a racehorse with a jockey which, while cute, is not terribly indicative of what most of us are doing on horseback.

So when your friend, trainer, family or S.O. texts you to see what you’re up to at any given moment, your options are limited to “galloping my racehorse” or actually typing out what you’re doing with one hand while you juggle the reins in the other hand like some sort of old-fashioned texting heathen. What is this, 2008???

But where there’s a need, equestrians always find a good way to fill it: enter the HorseMoji app, created by Christina Bock. Bock describes herself as an avid equestrian who, like us, just wasn’t satisfied with the limited equine offerings of the basic emoji keyboard. HorseMoji is the first app of its kind specifically devoted to equestrians, so naturally we had to download it and check it out.

Here’s just a small sampling of the many emojis you can send as part of the app:

And of course, for every emoji, there are a thousand applications. Here are a few examples:

For those of us who are tired of typing “I’m at the barn”:

For simplifying your explanations to non-horsey family members:

For conveying your current facial expressions as well as your fun-loving sense of humor to your long-suffering significant other who just wants a normal dinner for once:

… seriously though, those people deserve a gold star for what they put up with.

(LOOK AT ALL OF THOSE BREED OPTIONS. Now you can accurately describe in emoji form just what you bought at the horse sale that day!)

And for those moments when you have too much pride to actually say the words “I got bucked off again.”

Be advised that third-party keyboard apps, including HorseMoji, require full access to the keyboard in order to function. Full access means that information about your keystrokes, past and present, can be accessed by the developer. Some users may choose not to allow full access, in which case some options and functionalities of the app may be limited.

HorseMoji is currently available for $1.99 at the App Store for iPhone and at Google Play for Android. This may be the most entertaining $1.99 you’ll spend in your equestrian life, so download it and get texting today!