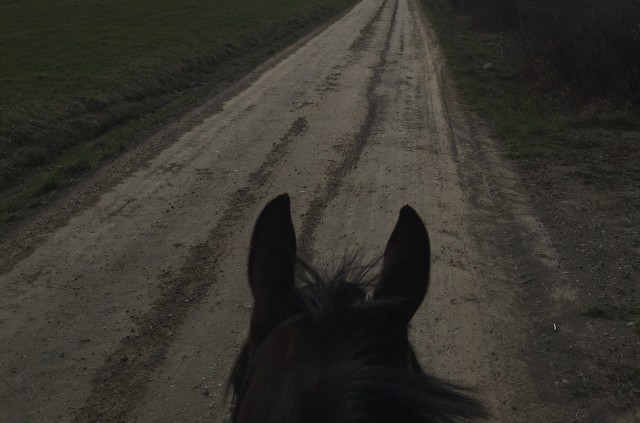 Haley Ruffner, wrapping up her first year of university, imagines if she could treat her fellow students the same way she treats her horse.

As the last week before finals draws to a close, it is safe to say that I’ve reached the point in the semester where I much prefer my horse’s company to that of any human. Living in close quarters with hundreds of my peers has made me grateful for the comparative simplicity of horse-human relationships. Without fighting or even two-sided conversations, Cricket and I communicate more effectively than some of my classmates. The thought of responding to other people like I do to horses is both amusing and oddly comforting.

1. Using food as a bribe. Ideally, I could present baby carrots to classmates either as a reward or incentive for good behavior, after which they would be extra friendly and keep up the good work in hopes of more carrots.

2. Reinforcing ground manners. While most people understand the concept of personal space, there are certainly some that could use a firm push to the chest or quick stop-and-back to let them know that it’s not okay to shoulder through someone.

3. Relying on voice commands. For some reason, saying “excuse me” and poking someone in the side doesn’t go over as well with people as it does horses. In both, the “excuse me” is sometimes ineffective, but with people it’s customary to keep saying it louder until they notice or go around them. “Whoa” means something other than “stop” in horse muggle language, so that command won’t work. Even a crisp cluck or kiss doesn’t go very far with people, which is a shame.

4. Pasture behavior. If I need to get my horse from the pasture, I refer to number 1 or just go out with a halter and lead rope and hope for the best. Polite thing that he is, he usually comes to see me. Trying to catch up with certain people outside of the classroom, on the other hand, take extensive bribing, calling and planning to track them down.

5. Bad attitude. In horses, ears back and a threatening snap earns them an attitude adjustment. If the grumpiness is consistent, vets are called to ensure the issue isn’t pain anywhere, and in most cases that solves it. Some horses do have bad attitudes, but they learn to channel it into something productive, find a different job, or focus the attitude on one behavior (how many girthy horses do you know?). However, lots of people are grumpy most of the time for no reason at all and make no attempt to change it. A growl and firm attitude adjustment would be gratifying but, alas, entirely inappropriate.