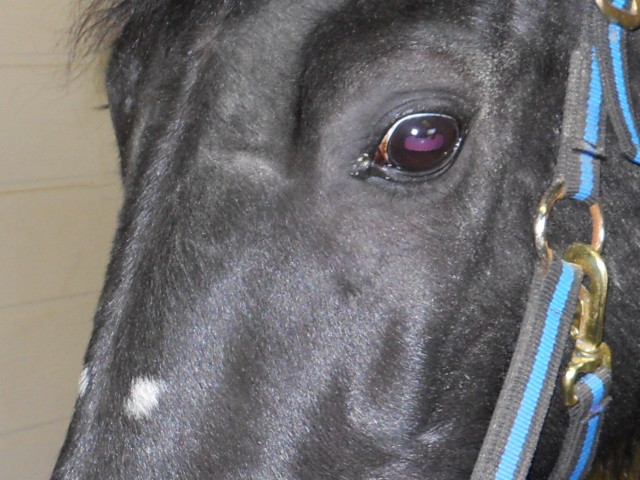 Candace gets the farrier’s perspective.

The farrier was coming to check on Theo’s progress: Ed, Theo’s rescue and rehab guru, phoned to invite me to observe. He warned that the guy might not answer questions or say much of anything at all.

Regarding “Big Lick”/Performance Tennessee Walking Horses, I have found only one farrier willing to talk. My phone calls, e-mails and “on-the-fly” questions to farriers around the country have gone unanswered. I was not going to miss this opportunity even if I did have to show up “farm early” on a bone-chilling morning.

I huddled with the barn cat next to an anemic electric heater to watch the farrier work. He spoke in a five-ingredient-recipe monotone. Ed took the lead in introducing me and asking low-key questions. Here’s what I heard: Theo’s front right hoof is 80% better. The yellow area on the sole is good (it used to be pink and red with bruising). The infection in the front left hoof is drying up and the wall of the hoof and the sole are starting to grow together. The foot soaks can be reduced to three times a week. The farrier trimmed some of the dead hoof and notched into it to allow the Clorox and medication seep in.

The rear hooves had improvement too: the “blown-out” area where the plastic patch had been is growing correctly from top down. He pointed to the white line of growth. Ed told the farrier that Theo has grazing time every day now; the farrier said the exercise was good for Theo’s circulation and would help dry out the infection. All this progress has taken eight months of diligent and costly care.

The farrier’s point of view

Since the farrier was warming up, I tip-toed into the conversation. I remarked how quiet Theo was standing. Ed directed my attention to Theo’s back right leg — it quivered. Ed said that Theo will stand quiet for anything the farrier does, but his trembling leg gives him away.

The farrier offered that in his experience the “Big Lick” TN Walkers always stand like soldiers. A term sometimes used is “carrying the fix.” The fix is the increase of weight in stacked shoes, chains, pressure bands, soring, or whatever creates the “artificial travel,” as he called it. Basically, pain. If a Performance TN Walking Horse can’t “work through the fix,” or stand for the pain, it might be labeled “gutless.”

From what he had seen, the shoeing on the “Big Lick”/Performance horses can cripple the horse more than the soring — the shoeing can actually cause them to founder. It can change the structure of the foot and cause the coffin bone to turn. When that happens, that’s it. No hoof, no horse.

The “performance training” is considered by some to be a “quick fix” method. The farrier pointed out that the faster a horse can be “trained,” the more horses can be trained, and the more money a trainer can make. Compared to the minutia of balance, body position and response to cues used in other equestrian disciplines, are these action devices truly training? All I got from the farrier was a glance.

Taking a “Big Lick” horse off of stacks

How about taking a Performance TWH off the stacks? I had received an answer from the one farrier who would speak to me. What would Ed’s farrier say? I took a chance.

His response pretty much matched. Both farriers told me that, yes, you can just pop off the stacked front shoes and the trailered back shoes and let the horse stumble around until he adjusts. You can do whatever you want to a horse, but will he be sound?

Both farriers explained that the front of the horse can be as much as six inches shorter after removing the shoes. There could be muscle shortening, strain on the tendons at the cannon bone and back imbalance. I understand that heavier shoes and other action devices can be secured onto fillies and colts at 16 months old. How might the devices affect bones still forming? It may impede sound and balanced growth.

Both farriers suggested not using the devices at all. That said, both recommended careful, targeted rehabilitation for a horse who wore stacks. One suggested a slow “stepping down” process to give the hooves time to grow to a normal length and to help the horse’s muscles and tendons acclimate to the change.

Ed led Theo back to his stall where he would gaze out at the pasture. Theo must wait for the other horses to be turned out before he can be sent out for the day. I was having trouble hiding my hyperthermia and didn’t want to press my good luck with the farrier, so the cat and I followed Ed out of the barn. Theo’s team had helped him make great progress. Ed’s mission is to help Theo be sound in body and mind. He has hopes (and plans) for Theo to live a productive life. Ed finds satisfaction in each bit of progress. Theo just wants to get back outside.