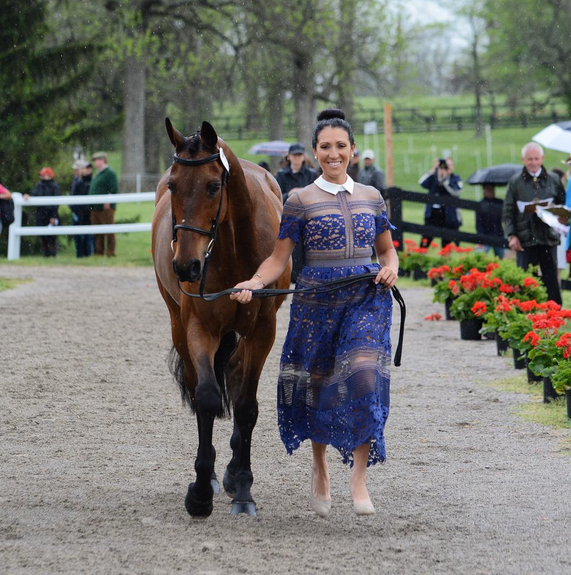 The first jog is in the books!

The Rolex Kentucky Three-Day Event takes place this week, and our sister Eventing Nation is on the scene! We’ll be sharing highlights each day, but keep it locked on EN all week long for up-to-the-minute reporting and in-depth coverage of the whole event.

All horses passed a soggy first inspection this afternoon at the Rolex Kentucky Three-Day Event, with 72 combinations moving on to dressage. Two horses were withdrawn prior to the start of the jog: Caroline Martin’s mount Quantum Solace and Rachel McDonough’s mount Irish Rhythm.

Caroline Martin withdrew Quantum Solace from what would have been their four-star debut due to a suspected infection. “We think he may have a viral infection, and it’s in his best interest not to compete this week,”she wrote on her Facebook page. “I’m really disappointed, but I hope to be back with Nacho in the future.”

Rachel posted on her Facebook page that she decided to withdraw two-time Rolex competitor Irish Rhythm after he wasn’t feeling 100 percent. “Oliver was not feeling his normal self, and I feel this is the best decision for my boy. I know him too well and he has given me more than I could have ever dreamed to push him if he is not feeling his normal fiery self.”

Three horses were sent to the holding box, with all accepted upon representation: Ryan Wood’s mount Frankie, one of three rides for him; Liz Halliday-Sharp’s mount HHS Cooley, one of two rides for her; and Matt Brown’s mount Super Socks BCF, who is making his first CCI4* start. Despite a steady rain that fell throughout the horse inspection, the vast majority of horses and riders opted to stick with their first choice for outfits. Stay tuned for EN’s picks for Best Dressed and a full photo gallery, but you can get a sneak peek now on our Instagram.

Surely Joe Meyer has to be in the running for @dubarryofireland Best Dressed in his kilt! #rk3de A photo posted by Eventing Nation (@goeventing) on Apr 27, 2016 at 11:54am PDT

There were definitely a few dramatic moments, with Colleen Rutledge taking a tumble on the jog strip but thankfully popping right back up no worse for the wear. Clip Clop showed off his bucking skills, perhaps to punctuate the fact that Joe Meyer rocked a kilt in honor of his father and grandmother.

We saw a number of fresh horses looking fighting fit and raring to go. Lynn Symansky did a valiant job of hanging on to Donner the Deer, who looks more than ready to skip around Derek di Grazia’s cross country course. Manoir de Carneville was absolutely breathing fire before his turn on the jog strip with Sinead Halpin, who looked stunning in a stylish hat.

With rain falling and thunderstorms crowding this afternoon’s radar, there was definitely a certain tension in the air through the horse inspection. These horses and riders have worked so hard to get here, which made it all the more heart-stopping when three horses were sent to the holding box.

It was definitely an emotionally charged moment for Liz Halliday-Sharp as HHS Cooley was announced as “accepted” after re-presenting from the holding box. She breathed a huge sigh of relief as her super groom Gemma Jalinska grabbed her in a big hug. Those are the moments that define what it means to compete at Rolex.

If you’re just tuning in to EN, don’t miss our Team Picks, Maggie Deatrick’s predictions for the top 15 finishers, and the next edition of Rolex at a Glance featuring numbers you need to know about all the riders competing. Click here to catch up on all of EN’s coverage, and stay tuned for much more from the jog!