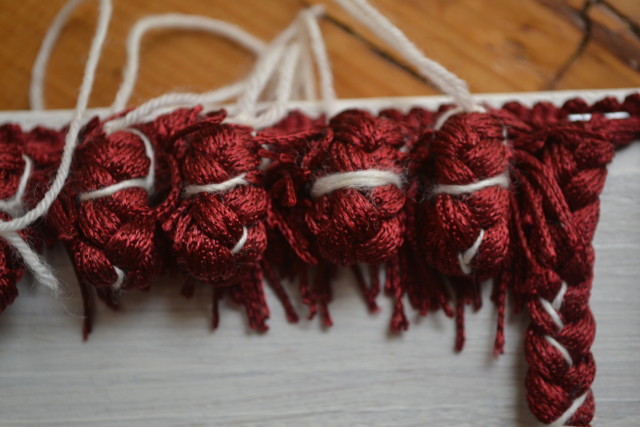 Last week we tried out the tools, but this week Lorraine Jackson seeks out the most important tool of all: a horse willing to be braided. Again, and again, and again.

Check out Part I of our braiding series here!

While visually learning the braids and getting accustomed to the tools was a critical element of braiding success, my most critical tool of all was a gallant steed who didn’t mind some quality crosstie time. Books and videos are great, but if 10 years in the 4-H program taught me anything, it’s that the best way to learn is by doing. And I knew I was going to have to do a lot of braids to get my act together.

If your horse is not the gallant steed type that will stand willingly in one spot for a couple hours, I highly recommend borrowing one. Blessed are the 20-year-old schoolmasters, for they shall get a good grooming and bonus treats. I was lucky enough to borrow one such blessed animal on occasion, and other than testing the stamina of his old-man bladder, he was a perfect specimen.

Cache, the most patient horse alive. Photo by Lorraine Jackson

As we discussed before, this was my first go at really good, really tight finger braids by the book. I knew that it was probably going to take me quite a bit longer than the instructional tools suggested my first few times, but I was still utterly unprepared for how long. My first go — from bridlepath to withers — took about 90 minutes. Which in the moment I thought wasn’t so bad. Now to pop the braids out and head home.

What I learned was how long it takes to “pop the braids out”: easily 30+ minutes. Because the perfect button braid requires the yarn to be braided pretty deep into the braid, sewn up, and then knotted several times, I found it took several meticulous clippings with the scissors and lots of manual undoing to get each braid out. The good news is, I’m confident that even my first rudimentary button braids could have survived a category 5 hurricane and a roll in the burr bushes.

Unfortunately, committing a few hours of work to each training session began to feel terribly daunting, and I started to wonder if there was another much more ridiculous way to keep hacking away at my skills. While highly unorthodox and definitely not the pro-braider approved method of learning to braid, this scheme provided some ample opportunity for at-home practice:

Meet Harry. I bought 1.5 yards of 5 inch fringe at a craft store, doubled it over on itself, used an upholstery staple gun to adhere it to a piece of scrap wood, and then nailed it at standing height to a door frame in my house, for a grand total of about $5.

Cons: The fringe obviously doesn’t taper the same as a real mane, it’s a different texture, and it doesn’t lay quite right because it’s not growing out of a real crest.

Pros: He’ll stand all day, he’s a real easy keeper, and I can practice in my living room while I watch baseball. It’s not perfect, but it’s close enough that I can simulate each and every step of the process in rhythm without driving a horse nuts.  It helped me learn some muscle memory, practice my technique, speed up my internal braiding tempo, and experiment with various ideas in short, digestible snippets throughout my day.

While I know the legit, career braiders are probably drawing straws to decide which one of them gets to take me out back and shoot me, I have to stick to my guns and say that I love Harry the Wunderbraiding Pony, and I think I braid better because of the new man in my life. #sorrynotsorry

I’ve got the tools, I’ve got some training, and I’ve tortured a few real and fake ponies. Now what? In part III, I’ll discuss the next level of braidology: going from average to show-worthy, give my take on a few preferences and methods, and we’ll test drive a braiding DVD that teaches the braiding formula used by the queen of Wellington show grooming, Ruthann Smith. A tool which took me from having never done a hunter button in my life to this on my first try:

Go Braiding, and then Go Riding.

Special thanks to Carrie Matteson for the loan of her horse with a heart of gold!