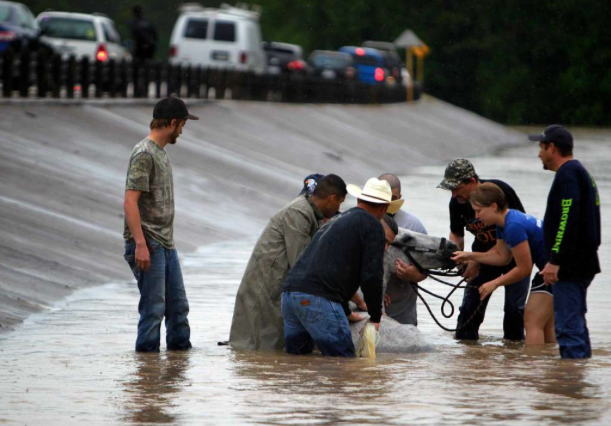 After a record-breaking rain Monday morning, over eighty horses were stranded in the resulting floodwaters. Amanda Uechi Ronan, fortunately just out of the flood zone, reports.

After days of near-apocalyptic warnings that flooding was imminent, Houston residents braced themselves for the storm, but no one expected the ferocity of those early hours on Monday morning or the widespread damage. The Houston airport reported just under ten inches of rain in less than six hours, while the nearby community of Hockley was pummeled with seventeen inches of rain in less than twenty-four hours. Texas Governor Greg Abbott declared a state of disaster for nine counties in and around the Houston area. Five people died during the flooding and emergency crews made more than 1,200 high-water rescues.

The photo was taken by Mark Mulligan of The Houston Chronicle. More photos can be seen here.

As a crowd gathered, the news of the horses’ struggle ignited outrage via social media, both for the barn owner’s lack of storm preparation and the business in general.

Throwing fuel on the flame were multiple reports that the Sheriff’s office was on scene, while volunteers claimed that was not the case.

The Cypress Trails Equestrian Center owner, Darolyn Butler, and the Harris County Sheriff’s Department have yet to comment on the horses’ status to the media. We are working to identify where the horses are currently located and to see if there is any way we can help.

Perhaps adding to the confusion, there were an additional twelve horses rescued on the opposite side of Houston near Humble, Texas. Stay tuned to the Houston SPCA Facebook for live updates.

Our thoughts are with all residents of the area, both human and animal.

Are you in the Houston area? If you have updates or reports to add to this article, please share your experiences in the comments section. Go Riding.