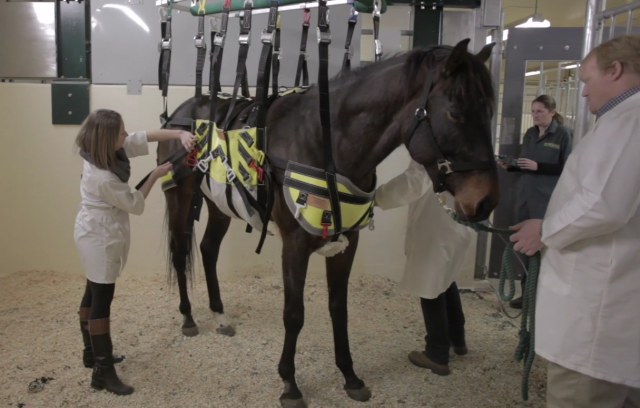 This game-changing system, developed by researchers, veterinarians and engineers in Saskatchewan, provides both mobility and support for traumatic injuries such as fractured legs.

While the concept of suspending a horse in a lift or a sling to facilitate healing is nothing new, there hasn’t been a good solution that allows a horse to keep weight off of an injured limb while also remaining mobile enough to combat complications such as atrophy, secondary injuries during the healing process or supporting-limb laminitis. The sling itself can also put unhealthy levels of pressure on the abdomen.

However, researchers and engineers teamed up with veterinarians and equine biomechanics experts at the University of Saskatchewan to build a robotic lift that provides a healing solution not only for the horse’s original injury but reduces the risk of complications as well.

As a robotic system, the veterinarian programs the lift through a computer, telling the lift how much weight to take off the front and back ends of the horse. The lift adjust accordingly — and is also programmed to “catch” a horse if it detects sudden movement, such as the horse tripping or falling while partially supported.

This type of system will allow a horse to initially be fully supported to start healing; as the horse heals, he can start to support more and more weight on his healthy limbs, increasing blood flow and fighting muscle wasting. As partial support allows safe mobility for the recovering equine, there’s less of a chance for complications such as supporting-limb laminitis to develop. This complication was what ultimately caused the demise of the famed racehorse Barbaro, not his initially shattering of his fetlock during the 2006 Preakness Stakes — demonstrating that secondary injuries are sometimes even more dangerous than the primary trauma.

Watch the lift system in action and listen to Dr. Julia Montgomery describe the process:

As Dr. Montgomery states in the video, the biggest issue right now with the project is the discomfort caused by extended amounts of time in the sling. Her team hopes to be able to fund continued research and development of a better sling for increased comfort for longer healing times.