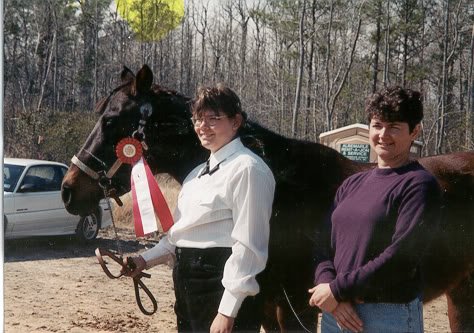 HN reader Laura Beacham shares the story of her horse contracting and recovering from the rare disease Equine Grass Sickness.

My one true hope in life was to have a horse. My parents made that dream a reality in July of 1996. She was a simple bay half AQHA mare who was green broke at the time named Saffire. We lived on the Outer Banks of North Carolina where wild horses roamed, but few were kept as pets or working animals.We mostly kept her at home, but for a few years she was boarded off the island. Back in the early 2000’s she came home to stay.

Due to the sandy soil in the region she was always prone to getting colic. One morning I went out to feed her and she was acting off. Normally a voracious eater, she just stumbled away from her food. I noticed her standing with her gut tucked up in her typical colic stance, but she was also very unsteady. She was swaying when she stood still and stumbling as if she was drunk when she walked. I feared after the bad weather we had maybe she was colicing badly this time or maybe while eating some tall grass from the neighboring property she ingested a pesticide.

I had my father call the vet out because she was just getting worse. By the time the vet arrived she could barely stand and walking was out of the question. The vet was clearly stumped because her symptoms were vast. The neurological symptoms pointed to EPM or EEE but the fact that within a day she went from a normal horse to a barely functioning horse was odd. She had a small fever, colic stance, drooling, staggering, swaying, sweating in the cool air and was shivering violently. My vet pulled blood to have it tested, gave her a shot of banamine and told us to hope for the best. We were told that if she went down we could either haul her two hours away to an equine hospital or have him euthanize her. He did not hold much hope because he had never seen anything progress that quick. The banamine helped with her colic stance, but she still refused to eat and could not walk more than a few steps. She only had a run-in barn so there was no way to really secure her if she did go down.

I was a wreck, sure that I was watching my hopes just withering in front of me and dying. She was only around 10 years old at the time. The vet called that evening to check on her and gave us some interesting news. The vet had read all of his medical journals and then turned to the internet. He found an article from the United Kingdom about Equine Grass Sickness and he said all the pieces fit together. We had had a wet spring, she had all the symptoms listed and the grass she ate off of the day before more than likely contributed to her getting sick due to it being wet and matted. There was little that could be done other than give her banamine and moniter her. Some horses recover from this while some do not.

It took her 24 hours from the onset of the disease to show interest in her food and almost a week to start walking normally. She is now 25 years old and loves being a pasture pet to another little girl. She has never had another episode due to proper diligence during cooler and wetter than average spring weather. The episode she had was not severe enough to cause lasting damage. We estimated she only ingested a small amount of the toxin from 30 min of hand grazing. Imagine how much worse it could have been if she had free access to the grass.

While I no longer ride or keep horses I still enjoy them no matter what.

The diagnosing veterinary practice was Coastal Animal Hospital in Kitty Hawk, North Carolina. Saffire is the only known horse to have contracted Equine Grass Sickness on the Outer Banks.

Thanks for sharing your story, Laura!