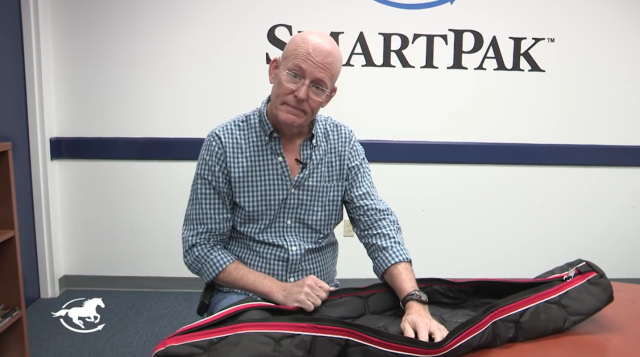 This “Ask a Non-Rider” from SmartPak is a double whammy for the non-riders of the company: not only do they have to identify a fake tail bag, they have to wrap their minds around the fake tail itself!

While SmartPak‘s hilarious “Ask a Non-Rider” video series is usually the source of a good laugh and a little harmless fun that we can all relate to, the latest videos in the series reveal that perhaps our non-riding friends are a good mirror to the horse industry, questioning some of the rituals, objects and behaviors that we see as totally, 100% normal.

Such as the fake tail: many of us on the various show circuits have used a fake tail to fill out our horse’s natural tail, with the end result the thick, full, perfectly-squared off show tail we’ve all come to know and love. SmartPak’s non-riders, however, aren’t so sure about this whole “unrealistic standards of beauty” thing — as well as, of course, getting adorably confused about where exactly this bag goes:

One non-rider in particular had such a hard time wrapping his mind around the concept of the fake tail bag that SmartPak felt we deserved to see his entire interview start to finish. We present, “A Tail of Woe: SmartPaker Kent and the Fake Tail Bag”:

Don’t worry, Kent, we’re laughing WITH you, not AT you.