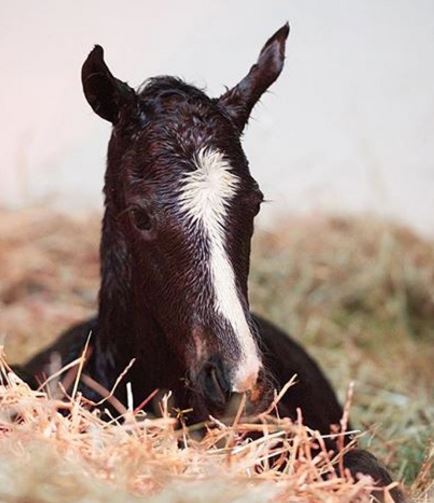 And of course, he is ADORABLE.

Zenyatta safely welcomed her most recent offspring into the world this morning, and it’s a darling little colt with face markings to match his 2009 Breeder’s Cup Classic Champ and 2010 Horse of the Year mother. (note: must be logged into Facebook to view)

The colt is the son of War Front, and it is Zenyatta’s second cross with the 14-year-old stallion of Claiborne Farms. Zenyatta had previously been bred to War Front and produced a healthy filly, but the foal was euthanized after a tragic pasture accident in 2014.

Several years after Zenyatta’s retirement from racing, her loyal followers continue to watch the mare’s progress as a mother courtesy of a very busy social media account, and the mare has been on foal watch for several days.

Congratulations to mama Zenyatta and all her connections!