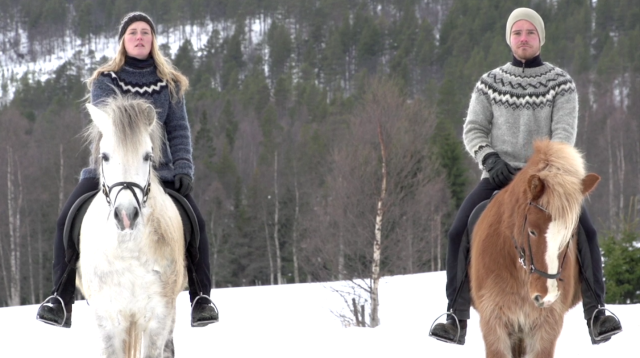 The brand-new preview teaser for the three-part documentary series ‘Horse Powers: From the Land of the Vikings’ just released yesterday — we’ve got the details!

Horse lovers can be found all over the world: our cultures and languages might be different, but the undeniable draw of life with horses is exactly the same. That’s why we are loving the new preview teaser for Horse Powers: From the Land of the Vikings, which follows three stories of Norwegian families and individuals who have built a life for themselves centered around the horse.

The storylines are varied but gripping: the mountain horsewoman who left a city job behind to raise horses in the country and compete in the Mongol Derby; the family who raises and trains horses together as a family business; the Afghanistan war veteran who turned to horses to help him heal from post-traumatic stress disorder.

The horse has been a crucial aspect of Nordic history from the days of the Vikings onward, an importance that is still reflected today in the horsemen and horsewomen of Norway. This documentary series, filmed in the jaw-droppingly gorgeous countryside of rugged Norway, looks like it will be spellbinding!

The segment of the documentary featuring Nico, the Afghanistan war veteran, is still in fundraising — the Horse Powers crew is taking donations to bring Nico to the United States where equine therapy for veterans is available (no such programs exist in Norway). The fundraiser has reached its primary goal but is still accepting donations for its stretch goal, which would extend Nico’s experience in the United States and broaden the scope of the documentary. You can learn more about the fundraiser here.

The documentary series is slated to air in the United States on PBS, as well as Norwegian television. It’s scheduled to release in December of 2016: learn more about Horse Powers on the documentary’s website and “like” the Facebook page for regular updates!