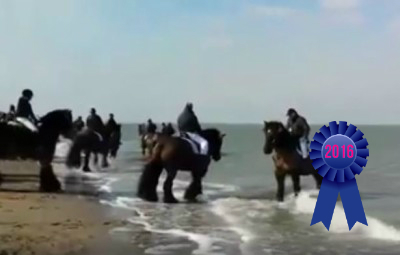 This footage is heartstopping, hilarious, and will make you want to crawl under a stack of electric blankets in your fuzzy socks.

A rider got the frigid dunking of a lifetime while on a group ride near the sea, and while it could have quickly turned into a scary situation, the rider remained calm and both the horse and rider seemed no worse for the wear. (Note: must be logged in to Facebook to view.)

Beach riding can be a memorable cross off the old bucket list, but it can also be a bit scary to a horse unfamiliar with the ocean/shoreline landscape, sounds, and atmosphere. The British Horse Society has a very handy guide on the subject that we highly recommend. Their suggestions include: