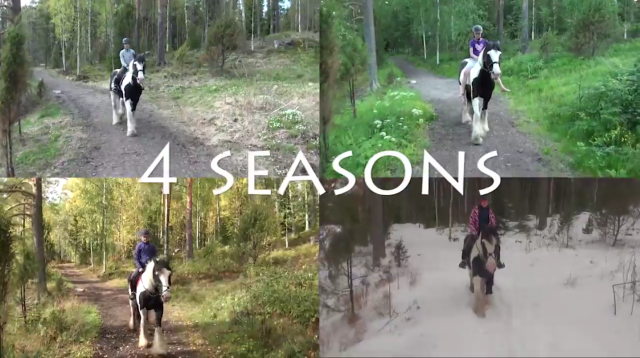 Reader Peter Hällström sent us these incredible videos of his young daughter aboard Ian the horse, compiled of footage recorded over the course of a calendar year.

Peter Hällström of Borgå, Finland filmed his 11-year-old daughter aboard Ian the Irish cob — just a few minutes of footage each day. What he did with this footage is pretty cool: Peter edited the video in two different ways to show the progression of calendar year through the lens of one girl on one horse meandering down a single trail.

The journey down the trail becomes almost metaphorical as Ian and his young passenger steadily progress from season to season, with the girl changing almost imperceptibly from day to day while looking noticeably older and taller by the end of the video.

Here’s a different version, comparing all four seasons in a split frame:

Peter writes: “It’s fun to see how much the girl grew up in one year! And also how different the four seasons can be!”

While Ian the cob passed away in 2014, these videos survive as a beautiful little tribute to a lovely animal and the little girl who spent so much time with him.