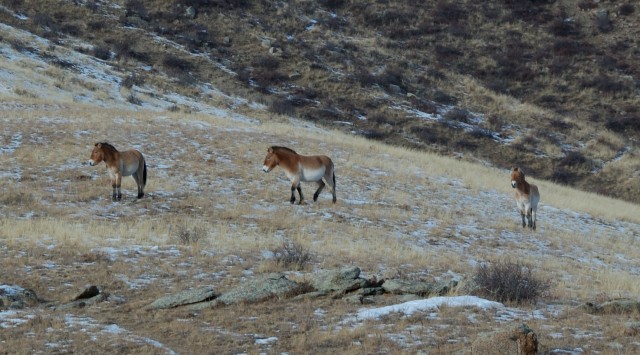 Is this a case of true de-extinction of an entire species? Or another case of designer breeding?

When North Dakota-based breeder Jill Langford first got into horses as a little girl, she never imagined that she would be the pioneer for a new breed that is quickly becoming one of the most controversial subjects among horse lovers and scientists alike.

Today, Langford is the first and — so far — only breeder of a small and hardy breed of pony that she is calling the “Neohippus.” A play on the ancient Greek prefix “neo” (“young” or “new”) and Eohippus (“Dawn Horse,” one of the earliest known ancestors of the modern horse), Neohippus can be literally translated as “New Horse” or “New Dawn Horse.”

“These babies represent the dawning of a new age in horse breeding,” Langford said proudly. “Instead of breeding for larger, more athletic modern horses, the Neohippus is the result of careful selective breeding for primitive, wild traits.”

Langford’s first foray into breeding happened by mistake. She had dreams of starting a pony rescue at her family’s small hobby farm, and in 1987 she took in an abused Shetland mare and a feral colt of indeterminate heritage.

“He was some kind of pony cross,” Langford said. “I’m pretty sure there was some POA in him, maybe something gaited and hairy, like an Icelandic. He would be really spooky one day, and the next he’d think he was king of the mountain and try to take you down. One thing for sure is that he was a mean little guy! We called him Beelzebub, or Bubba for short.”

The only existing photo of Bubba, taken shortly after his rescue. Photo courtesy of greenleaf-stock.

It wasn’t long before Langford discovered that her Shetland mare was pregnant, and the only possible culprit was Bubba. Any other mares that Langford brought in to her rescue surreptitiously and quickly came into foal thanks to Bubba’s ability to break out of every enclosure at the farm. Langford’s rescue was soon teeming with Bubba’s offspring. Not only did these ponies inherit their sire’s flighty temperament, but the Langford family was shocked when they discovered that all of the foals were born with two small extra toes growing from each fetlock.

“My vet said that these toes are something he’d never seen before, and it’s a dominant mutation so that’s why all of Bubba’s babies came out like this,” she said.

The toes are vestigial, which means that they are too small and underdeveloped to be used for walking, but these toes and the ponies’ primitive markings reminded Langford of the ancient equine skeletons she saw at a museum as a child.

Evolution of the horse. Courtesy of Wikimedia Commons.

After nearly 30 years of carefully crossing her three-toed ponies with other rare, ancient breeds such as the Tarpan and Exmoor, Langford’s farm soon evolved from a rescue into a bona fide breeding program. It also serves as the international headquarters of the Neohippus Breed Registry. Langford and her husband Tony Wellspring operate the farm and registry with the help of their oldest son, DJ. Around 300 ponies worldwide are currently registered as purebred Neohippus, and all are descended from Langford’s foundation stud Bubba.

Bubba’s descendants are looking less like modern horses and much more like their distant ancestors, the Mesohippus of the Oligocene epoch (32-24 million years ago). Standing less than 8 hands high, the Neohippus possesses a shorter neck and more arched spine than most modern horses, as well as the extra toes that are quickly growing longer and stronger with each generation. They are generally dun or grulla with sparse manes and tails. They are too small to be ridden and are known for being difficult to train; most Neohippus owners keep their ponies pastured in small herds with limited human contact, trying to keep their existence “as close to natural as possible.”

Neophyte, a Neohippus weanling. Note her arched back and vestigial toes. Photo courtesy of Wikimedia Commons.

Ultimately, Langford’s goal is to keep breeding these tiny, three-toed ponies until they resemble the earliest known equid, the 50-pound Eohippus (also known as the Hyracotherium). If the genetic differences are large enough between the Neohippus and Equus caballus, specialists say that the Neohippus can be scientifically classified as its own species, like the zebra or Przewalski’s horse. Langford says that the breed represents “a throwback to the beautiful little critter that came before the horses we know and love today,” and she hopes that the small but growing band of Neohippus aficionados continues to spread the word on the “de-extinction” of the species.

The Neohippus is not without its opposition, however. Langford has been called everything from a backyard breeder to a public nuisance.

George Proudmore, the owner of Proudmore Quarter Horses and one of Langford’s neighbors, is the most vocal critic of the Neohippus.

“It’s an abomination,” Proudmore said. “These mongrel freaks of nature come crawling under my fence, eat my pastures, scare my horses, and [spread manure] everywhere. Jill’s little designer pony operation goes against the laws of nature. I say if it’s extinct, it should stay extinct.”

Bioethics is a growing field that examines the implications of bringing extinct species back to life, such as cloning woolly mammoths or the extinct frogs in the controversial Lazarus Project of 2013. Langford argues that because she does not clone her ponies or use genetically-altered DNA, she is doing the exact same thing that other breeders do: selecting animals to pass desirable traits to their offspring.

“If a Thoroughbred farm can breed horses to race or jump, Neohippus breeders can breed their horses to be peaceful wild animals, the way nature intended,” she said. “I’m not playing God, no matter what others might say.”

What do you think, Horse Nation? Do you think the Neohippus is a legitimate breed and are the registry’s goals realistic? Share in the comments below.