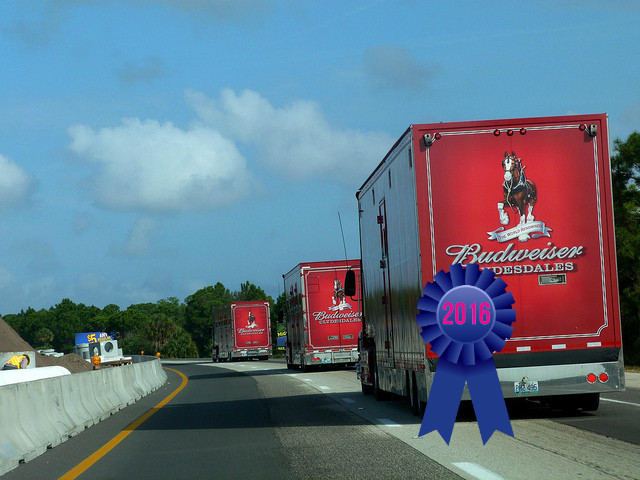 You guys, it was a JOKE.

One of the beloved and iconic Clydesdale teams that represent Budweiser and the Anheuser-Busch beer production company has been reported missing or stolen, according to a police report filed earlier this week by the mega-corporation.

“We are extremely concerned for the safety and well-being of the team,” Budweiser spokesperson Lisa Weser said Tuesday. “We’re investigating every possible lead right now, and asking all citizens to keep an eye out for our boys. We are completely flabbergasted as to how such a conspicuous team of horses could just disappear like this.”

The police report states that Budweiser long-haul driver Ed Murphy stopped in Colby, Kansas on Monday night at a planned layover location before finishing the drive to an event in Denver. The team was unloaded and moved to a secure turnout facility for the night, and when Murphy returned for the horses in the morning, the gate was wide open and the horses were gone.

Anyone in the Midwest region is encouraged to keep an eye out for suspicious activity, and report anyone offering to sell a Clydesdale gelding. All eight of the horses are between 17-18.2 hands, have four white socks and white blazes, and answer to the names Bud, Buddy, Bud Light, Buddy Light, Bud with Lime, Boo Natty, and Craft Beers Suck.

As of 9:00 AM Central Standard Time, the horses have been reported found and safe. Colby police chief Andy Lawson says the horses were found by a citizen in a wooded area on private property, but they are not investigating a crime at this time. “It seems the Budweiser team was found in, er, good condition minus some rather serious headaches, sensitivity to light, irritability, and general belligerence.”

Not previously mentioned in the report, it seems that in addition to missing the horses, the driver was also short several dozen kegs of beer, and several cases of Bud Light. The horses were discovered in the woods surrounded by empty kegs and bottles, and reportedly rolling on the ground and muttering “we are never doing that again.” One of the geldings was wearing a broken beer funnel hat, and several others were sporting sunglasses and refusing to move until someone brought them some hashbrowns.

The citizen says he reported the horses after his house, located just a few hundred yards from the scene, started shaking “as if there were an earthquake or something.” The resident followed the booming vibrations into the woods where he discovered “what looked like horses playing a huge game of flip cup and beer pong. They were using the kegs as cups! I’ve never seen anything like it.”

The eight geldings are being thoroughly evaluated by a company vet to ensure their health before shipping to the Betty Ford Clinic in California for some “rehabilitation and soul searching.”

We’re relieved to hear the team is safe, and remind all our readers never to drink and carriage drive.