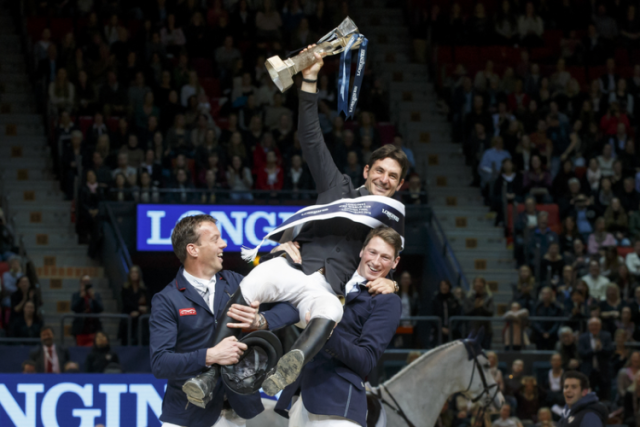 The FEI World Cup Jumping competition took place last weekend in Gothenburg, Sweden, seeing the best show jumpers in the world square off over three rounds for the coveted Longines FEI World Cup trophy. After three tense rounds, it was last year’s champion Steve Guerdat of Switzerland aboard the ten-year-old gelding Corbinian who captured the win.

Thirty-five starters headed into the first speed round, with France’s Penelope Leprevost winning by over two seconds over second place Simon Delestre, also of France. Steve Guerdat was not far behind, however, in fourth place and also with a clear round: (note — must be logged in to Facebook to view videos).

In the second round, the degree of difficult in Santiago Varela’s course was significantly raised — but that didn’t stop seven riders from going clear, including Guerdat:

In the jump-off, however, Guerdat and Corbinian dropped the first rail of the course — however, they maintained an overall lead for the full championship. Guerdat explained in the press conference that maintaining the overall standing was more important than winning an individual class.

The third day of the FEI World Cup included two more rounds, with Guerdat needing to go clear to stay ahead of Germany’s Marcus Ehning (behind by just two points), Germany’s Daniel Deusser and the Netherland’s Harrie Smolders (behind by three) and Belgium’s Nicola Phillipaerts (behind by four). Guerdat and Corbinian pulled off another brilliant clear:

After this round, Ehning had dropped out of the top stalking position with a dropped rail, but Deusser and Smolders went clear to put the pressure on Guerdat. He needed to stay absolutely perfect in the final round of the championship — and fans who recall last year’s championship will remember that while Guerdat won, he did so on two rails in the ultimate round. He could afford no such mistakes today.

Fortunately, he and his brilliant gelding rose to the occasion with yet another clear round, bringing the crowd to its feet and winning the overall championship.

Our hats are off to Steve Guerdat and his talented (and still young) Corbinian! We’re looking forward to seeing where this partnership goes next — like, say, Rio, where Guerdat will defend his Olympic gold medal.

[French to the fore on opening day of Longines 2016 final]