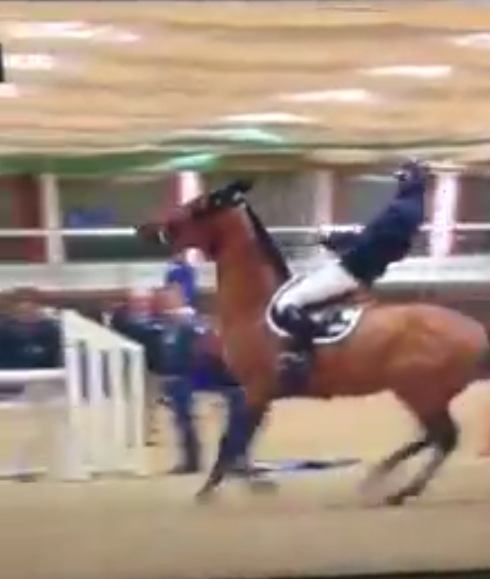 Her apology comes in the wake of a viral video.

The video begins innocently enough: French show jumper Penelope Leprevost is trotting her mount Vagabond De La Pomme in the warm-up ring in Gothenburg, Sweden for the FEI World Cup show jumping championship last weekend. Vagabond stumbles badly and falls to his knees, nearly tumbling right onto his face, but recovers as Leprevost keeps her weight centered and lets him find his footing.

Then things start getting uncomfortable: Leprevost checks Vagabond for obvious injury, then kicks him forward and immediately pulls back on his face. This kick forward/pull back continues for several minutes.

This is the video clip which has since gone viral: (note — must be logged in to Facebook to view).

This clip was recorded from a local news broadcast which first showed Leprevost’s rough treatment. At time of writing, the clip has been shared over 5,000 times via Facebook.

Amidst the onslaught of criticism, Penelope Leprevost issued the following apology on her Facebook page, in both French and English (click “See More” for the English translation).

So Leprevost describes her actions as intending to help the horse “pull himself together” but also an overreaction. The horse was checked by the French team veterinarian Jérôme Thévenot. Leprevost and Vagabond went on to jump a clear round and place eighth overall in the championship.

Due to the wave of online criticism, however, the FEI has announced that it is investigating the incident:

The FEI is looking into the full circumstances of the incident in which the French horse Vagabond de la Pomme stumbled very badly prior to the first round of Monday’s competition and the rider, Penelope Leprevost, reacted very roughly. The FEI Steward on duty in the warm-up reported the incident to the FEI and also to the FEI Chief Steward.

The French team vet Jérôme Thévenot also saw the horse stumbling but felt that the horse was fine to go into the arena. Vagabond de la Pomme was clear in the first round and was given a thorough check over in the stables afterwards by Thévenot, who reported that the horse was perfectly fine.

Horse welfare is central to everything the FEI does, and is also a priority for both the Swedish National Federation and the organizing committee of the Gothenburg Horse Show. The FEI’s Code of Conduct for the Welfare of the Horse is in place to ensure that horse welfare is protected at all FEI events.

So is this a so-called social media “witch hunt?” Or is there a case that this rough treatment was abusive?

One thing to keep in mind, no matter how we might feel while watching this video, is that internet culture gets out of hand very quickly in these situations — in researching for this article, I came across comments such as “I bet this horse is drugged” and “well she’s not a very good rider anyway” among other opinions. It’s so easy for the so-called “armchair riders” to pass these snap judgements with absolutely no evidence or way to know for sure if what they’re saying is true. None of us other than Penelope Leprevost can say with any authority why she acted the way she acted.

We love our readers at Horse Nation and respect the difference of opinions expressed by all of you, but we are equally proud of the fact that our readers keep commentary civil. Let us know your thoughts in the comments section below!