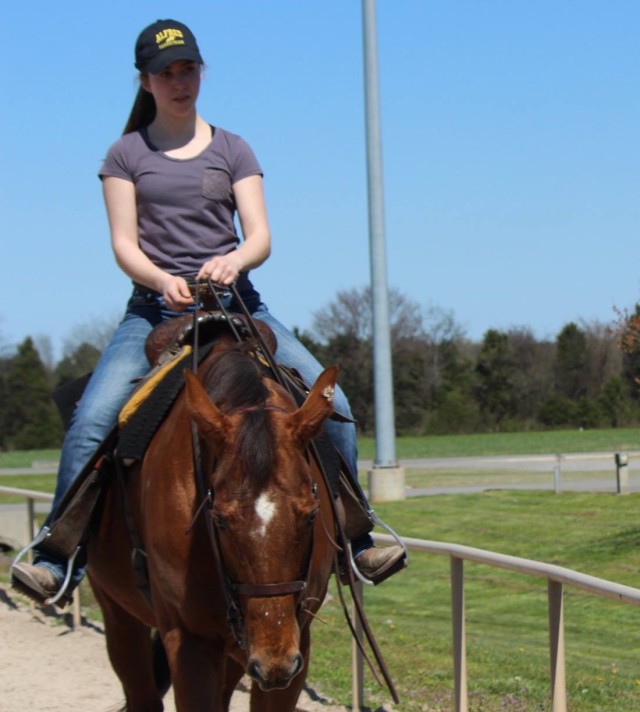 Even a disappointing end to the season has a bright side.

Haley getting some advice from coach Harry Hurd. Photo by Ellie Woznica.

Last week, I missed three days of school and drove twenty-six hours round trip to a horse show, and I came home with a fifth place ribbon, a seventh place ribbon and a great deal of personal disgust at how I rode.

The first day at the Intercollegiate Horse Show Association Semi-Finals in Tennessee, I rode a lovely horse named Chip who, though on the lazy side, was an excellent sport about the whole show. We got along really well, and I made the callbacks only to draw him again. After a break in the pattern, I ended fifth, missing Nationals by one place. I was disappointed in myself, but knew I had the second part of the show on Sunday to redeem myself.

The second day was the team show, which meant the classes were smaller and that all points won would go towards the team. The top three teams would proceed to Nationals, and by midday we were off to an excellent start and sitting second. I was the last class of the day, and by then we had moved down to third. Having drawn a reiner-type horse who had excelled both on the rail and on the pattern all day, I looked forward to my class: I’d had all day to memorize and rehearse my pattern, and I was ready.

After mediocre railwork, I once again blew my pattern — I moved my hand too quickly after a lope departure, causing my horse to throw his head and break. My seventh place in that class earned us no points, which dropped us down to fifth place and no qualification for Nationals.

As much as I wanted to be miserable and self-critical and get right back on a horse to practice until I couldn’t make that mistake ever again, the endless support from my teammates and coaches made that impossible. Several seniors in the running for team points had every right to be angry with me for blowing their last chance at Nationals, but they were among the first to give me a hug and tell me good job after my class. My coaches rightfully should have been critical of my ride for all of my mistakes, but they instead launched into a comical recounting of all the things they had apparently done that were much worse.

Although this was a disappointing way to end the IHSA season, I am eternally grateful for my friends who came together as a team for everyone who rode. This weekend we leaned on each other and held each other up through the good rides and the bad. I don’t think I’ve ever heard anyone cheer quite so loudly for seventh place, for zero points, as my team did when they announced my number — for no reason other than they wanted to show that they were proud of me no matter how badly I rode.

It didn’t end up exactly how I wanted it to, but the laughter I shared with my team, their heartfelt support and their kindness even after I had let them all down is what I remember. I will remember my mistakes for a long time, but I know that eventually the friendships I made and reinforced are what will matter the most. My losses defined this season, perhaps, but my teammates’ support will define my entire riding career. Thank you, Alfred University western team and coaches, for being the best. I look forward to the seasons to come.