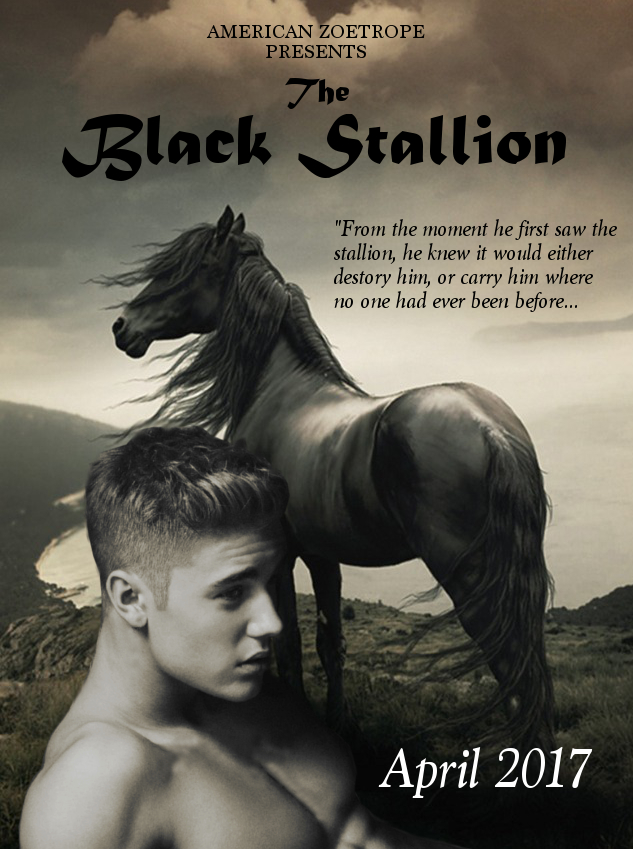 The reboot will star Justin Bieber as Alec.

American Zoetrope, a privately-run American film studio founded by Francis Ford Coppola and George Lucas, has just released its first promotional poster for the movie coming to theaters in April 2017.

Francis Ford Coppola, the director of the original 1979 The Black Stallion, is attached to the project as an executive producer only. J.J. Abrams, director of the most recent Star Wars iteration, has instead taken over the reins.

Abrams had this to say about the project, “I’ve always liked working on stories that combine people who are relatable with something insane — in this instance a boy who is shipwrecked with and saved by a horse. The most exciting thing for me is crossing that bridge between something we know is real and something that is extraordinary. The thing for me has always been how you cross that bridge.”

Justin Bieber seems to be having plenty of fun on set as suggested by these recent tweets.

Between that last tweet, implying Bieber was spending time at the race track, and Abrams’s comment about the shipwreck, it appears the story will stay mostly unchanged from the original. Whether or not it will also be a period piece, set in the 1940’s, has yet to be revealed, though the removal of Bieber’s copious tattoos and piercings in the promotional poster suggests it won’t be set in current time.

Fangirls will be happy to know that Selena Gomez, Bieber’s on-off girlfriend, has also been sighted on set. She appears to be there for moral support only, as she is not credited to the movie by IMDB.

Selena is a known horse lover, spending plenty of time in the saddle in Los Angeles where she is often featured on Bieber’s Instagram while they enjoy trail rides.

Is this project another desperate attempt by Bieber to win back his #horsegirl? Is the studio absolutely insane for attempting to remake a classic?

We’ll never know, because this is just an APRIL FOOL’S JOKE!