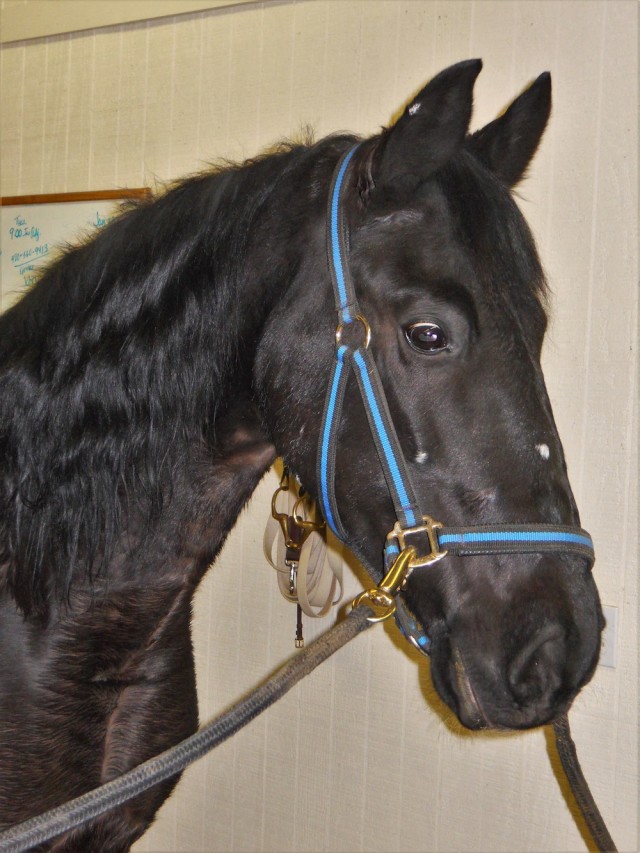 A ruthlessly condensed training only leads to a general superficiality, to travesties of the movements, and to a premature unsoundness of the horse. Nature cannot be violated.

When we last left our hero, Theo completed his first foray on a longe-line in the soft indoor arena. The exercise was to introduce the idea of being a horse. I never thought of it this way, but Theo was a “specialist:” he really only knew how to be a performaning “Big Lick” show horse, not how to be a “regular guy.” Education must be offered in small bites.

Ed, Theo’s rescuer, physical rehabber and “learn-to-be-a-horse” trainer filled me in on his last groundwork: Theo had made progress! Ed told me, “he’s responding. Getting it.” Theo had been free-longed with Ed in control. He responded in two telling ways: first, Theo had to be encouraged to leave a corner of the arena. He would zip back to the safety of the wall when he could snag the opportunity.

He soon chose to venture a few steps toward the middle — with encouragement. Ed watched to see what Theo would do: would he refuse to go further? Would he escape back to the corner and plant at attention as he had done before? Theo pricked his ears, strolled out and then picked up the tempo. That’s when he spotted the inviting open gate that led to his safe place – his stall.

Curiously, Theo hadn’t noticed the opening before. He sailed out of the arena, across the rubber floor mat and hung a right into his stall. Ed had left the stall open in case Theo needed to choose to leave. Ed led him back into the arena and turned him loose again — the gate still open. Theo completed his free-longe exercise and did not take the flight option again.

What does this mean?

Theo is developing the willingness to make decisions — that’s good. Ed said, “he came here a zombie. He would stand and quiver. He is growing from ‘yes sir, boss,’ to developing a personality. This is almost as good as having his foot get better.”

Ed’s task is to develop Theo into a sound horse mentally as well as physically. Theo seems to have been taught tension. I understand that huge progress was made when Theo took his first regular walking steps and gave up his usual spring-tight racing around. Then Theo relaxed his neck! Compare video clips below:

The method and theory

What is Ed’s method and why? The idea is that “working with a horse is a matter of asking questions. You ask a question and the horse gives you a response. It may not be the response you are looking for, but any answer is a positive move forward,” especially in Theo’s case. Ed will rephrase the question if Theo doesn’t give the answer Ed wants. “Good training is about changing the horse’s way of thinking, but in Theo’s case, you have to go a step backwards.” It seems that Theo needs to be allowed to think and to trust that it will be a positive experience if his “opinions” coincide with Ed’s. “He has to think about what I want and make the decision to do it even though it goes against his past life as a show horse.”

A week later, I padded into the arena to see Theo under tack, calm, with a relaxed head moving around Ed’s longe-line. I have learned to how to recognize Theo’s progress: calm was progress. Relaxing at the poll was progress. Not tensing up under saddle and responding to the “old tapes” of suspected past training was progress. I saw Theo had become more relaxed about freedom.

He was nervous about one big, bad, horse-eating corner. Ed encouraged Theo to inch closer to the offending corner with slow, light body pressure. I was amused as Theo sniffed and tasted the wall. He avoided moving forward by fooling around. He almost whistled and gazed at clouds before deciding to try the corner. By the end of the session, Theo could pass the corner without dashing by. I was hopping up-and-down thrilled and had to contain my excitement to not disturb the calm atmosphere created by Ed and maintained by Theo.

Ed told me that Theo has graduated to his own big stall in the barn where he can hear and smell the rest of the herd. He is allowed an hour a day turnout in his private paddock (with soft grass for his injured feet). Theo can see the other horses, hang with them, but they can’t get to him. This progress is “a big step closer to being a real horse.”

Theo stands “toes-out” in the rear. Ed infers that he was shod with shoes with a trailer, or a projection from the shoe. Trailers can alter the way a foot moves forward by changing the way it lands. A projection from the back of the hoof will hit the ground earlier than the foot would without one. A trailer on the lateral side can make the foot turn slightly when only the lateral heel hits first.

Theo’s rear toeing-out could be due to years of standing with trailers on his hind feet. He has contraction of the heels behind and in front. Even though this sort of shoeing can be considered “corrective” because its purpose is to change the way the horse travels, I’m told that when this kind of corrective shoeing is used from a young age it can change the way the horse’s leg forms. It can cause problems when used to create or maintain exaggerated gaits.

The photo shows an acrylic patch that was attached to Theo’s back hoof when he was rescued, noted within the circle. This kind of patch can be used to make it appear that there is a hoof wall on the outside where the trailer shoe would be on the back foot.

A large cavity was visible where a hoof wall should have been when patch was removed. Both rear feet had pieces of acrylic repair in the same location. Theo’s back heels seem to have been lowered and trimmed down in back to where he almost stands on the bulbs of his heels. Could this have been done intentionally?  I was told it is not unusual for this trimming to be performed on performance “Big Lick” Tennessee Walking Horses.

Theo’s back hooves are recovering a little better than the more severely damaged front. The blacksmith returns in early April. Ed will see what he has to say about Theo’s physical progress.

I am observing the time and patience required to help a wounded “specialist” show horse like Theo to be sound in body and mind. Winning has changed for Theo. “Horses like Theo earn the ribbons, often by enduring mental and physical pain,” Ed adds. “There’s no joy or accomplishment in winning like that.”

Candace will continue to follow Theo’s recovery. All of Theo’s stories will be tagged #SAVING THEO and can be accessed by clicking the hashtag at the top of this page.