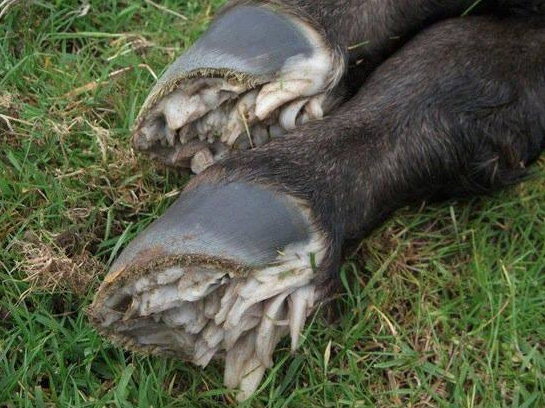 Also referred to as “golden slippers,” “fairy fingers” or eponychium, the soft capsule protects the mother’s uterus and birth canal from the sharp edges of the foal’s hooves during pregnancy and birth. The term also refers to the thicker skin around the fingernail and toenail in human anatomy.

Predators are attracted to the smell of the placenta, so it’s necessary for the foal and its mother to be able to move away from the birthing spot as quickly as possible — so the foal needs to have fully formed hooves at birth. During the foal’s first venture across the ground the soft hoof capsules are worn down to meet the level sole, revealing the hooves we’re used to seeing.

“I’ve always been fascinated by the Eponychium of the newborn foal’s hooves. These soft little fingers form a capsule which protects the uterus of the dam from the foal’s hooves during gestation. The rubbery capsule also protects the mare as the foal travels along the birth canal. You have to be quick to snap a pic of them as they begin to dry out and fall/wear away the minute that they make contact with the air. Within 24 hrs of birth there is barely a trace of them remaining. Mother nature has an answer for everything. Creepy little things aren’t they!” (Quest Equine)

“The hoof wall of a new born foal is made up of eponychium and horn tubule. Within 2 to 3 days of birth it wears away as the new foal begins to walk around.” (Cowboy Magic)