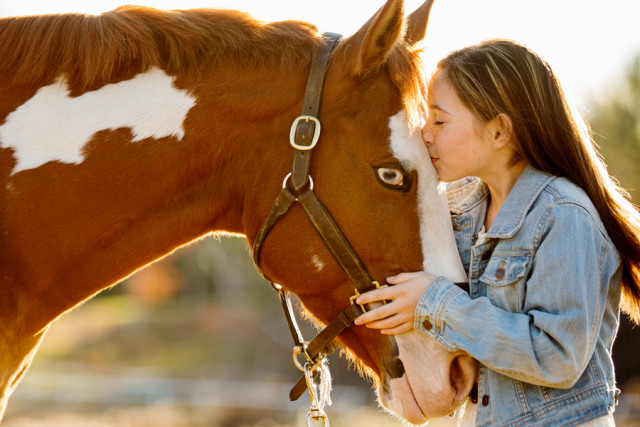 Looking for a cool horse job? Today, we’re featuring our interview with equestrian photographer Tracey Buyce, who specializes in capturing the special bond between horse and rider in images.

Dakota and Callie (Paint pony) are such a sweet pair and an excellent hunter/jumper duo in Saratoga Springs, NY. Photo by Tracey Buyce.

Tracey Buyce is a photographer based in Saratoga Springs, New York. While you might imagine that a horse-loving photographer would find plenty of subject matter at Saratoga’s racetrack, Buyce specializes instead in capturing special moments between “ordinary” horses and their owners through the lens. Her images tell a story and beautifully illustrate the bond between horses and humans. We caught up with Tracey Buyce to learn more about her undeniably cool horse job.

Have you always been an equine-specific photographer?

The equine work has really taken off in just the past year. I’ve actually been shooting since 2003, and went full-time in 2007. Originally, shooting weddings was my bread and butter — some weddings did include horses in the photo shoots, and actually about 80% of couples include their pets! But in the past year, I’ve started doing more and more equestrian photo shoots.

I did a big session for a Saratoga bridal shop with rescue horses — that was a really unique shoot. You have these models dressed in these lovely wedding dresses, posing with these horses who had been rescued, and were once skin and bones. It was really beautiful! My own horse Moose has also participated in some model shoots.

Teton, a rescue Belgian, poses with model Cailin for a Something Blue Bridal editorial shoot at the Wedding Barn at Lakota’s Farm in Cambridge, NY. Photo by Tracey Buyce.

What kind of clients are ordering equestrian photography?

The portrait sessions are typically women; many of them are young women but I’ve done shoots from ages twelve through mid-seventies. There are plenty of options for professional athletic shots at horse shows: many of these women have lovely images of themselves and their horse competing, but those photos don’t always capture the individual bond. And it’s that bond that makes up over 90% of their time with their horse, not the horse show!

I had a client in her mid-twenties say to me “I had no idea how much these photos would mean to me until I had them.”

Has your experience as a wedding photographer influenced your work with equestrian shoots?

Definitely — those skills have been invaluable. In wedding photography, there are plenty of staged shots, but often it’s the candid, off-beat, documentary-style photos that couples value the most — the images that really captured a moment or a personality. It’s the same way in equestrian photography: I have to be ready as a photographer to capture the moment as it’s happening.

One example was a shoot I did with a mother, her two daughters and a granddaughter with their ponies out in a field. One of the daughters happened to be in a wheelchair due to a non-horse-related accident, but when you see an image of a woman in a wheelchair with horses the mind naturally assumes that there must have been a horse accident at some point. I captured a moment when two of the ponies lowered their heads to nuzzle her, and in the photo the wheelchair is barely visible. So the photo is simply about the woman and her horses.

Talk us through a photo session — what goes in to producing these images?

First I meet with the client and get some background information: what do you love about your horse, what are his quirks? I also ask a few mundane questions that are quite important: can I make some sounds during the shoot to get his attention, can I use treats, and so on. Even with the owner’s approval I used a horse whinny noise on my phone once and it totally freaked out the horse in the shoot, so I always make sure everyone knows to expect the unexpected!

As the shoot progresses, the storyline of a particular relationship usually becomes pretty self-evident. I’ve never had a shoot in which the bond between a horse and rider did not become apparent!

And you are a horsewoman yourself, correct?

Yes! I’ve been in the “horse world” for about three years — owning a horse was a lifelong dream I didn’t think would ever come true. It sounds a little crazy and hokey but I was told at a photography workshop to “follow my dreams” and went and visited a barn. As soon as I stepped into the barn aisle I realized that this was what had been missing from my life. My horse Moose and I are a perfect match. I think being a “crazy horse lover” definitely carries over into my photography work as well.

To see more of Tracey’s work, please visit her website at www.traceybuyce.com! You can also follow her on social media for plenty of updates and examples of her work:

Do you have a cool horse job you think we should know about? Email the editor at [email protected]! To find more Q&A sessions, click the #HORSE JOBS hashtag at the top of the page!