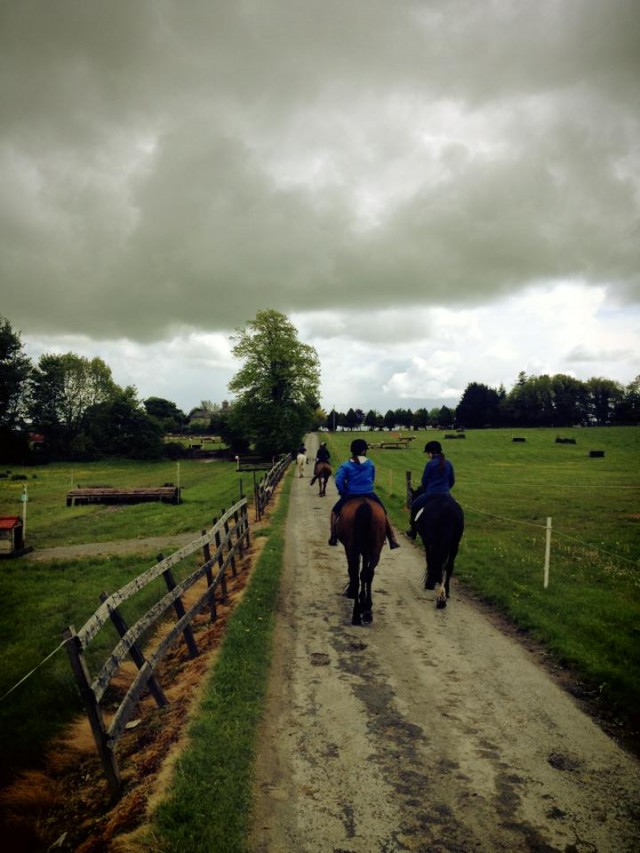 This question, I had learned, was intended to be a normal greeting in Ireland rather than an acknowledgement that you were in distress or danger. To be fair, given that I was sitting on a spirited little native-bred mare that I had just met that morning out on a cross-country course leaping over obstacles that I never imagined I would be facing, it was a valid question in any context. Oh right, we were in Ireland as well, home to some of the most courageous (if not reckless) riders in the world. Just take a look at their foxhunting.

But I was more than all right—I was having the time of my life. Oliver Walsh’s Flowerhill Equestrian Centre definitely understood how to show a girl a good time. I earned my new nickname about three combinations into our morning jumping session with my ear-to-ear grin—what my equitation might have looked like I’d rather not think about, but fortunately no one seemed to notice.

My mount, a sturdy brown Irish-bred mare called Classic, knew her job well and carried me over a variety of obstacles with ease, ranging from simple logs and stone walls to rollers, banks, drops into water, hedges and all sorts of interesting things painted to look like fruit. My companions—a mixed group of students from our equestrian program and my coworkers—were similarly mounted, piebalds and draft crosses (and piebald draft crosses) common among their horses. Every horse in the stableyard, regardless of size, shape, breed or color, jumped willingly and honestly, a true testament to the minds of these Irish horses since they were rented out by the day for people to bomb around with on the cross-country course.

Having worked at a dude ranch for five summers, I could appreciate these animals, as well as our fantastic guides. We were under the care of a young woman from the UK named Mel, who led us all over the course on a plucky little Appaloosa and watched each of us jump, calling encouragement, praise or suggestions (more than one among our party expressed a desire to get a recording of Mel yelling “Good girl!” to replay in our day jobs.) The flat-only riders in our traveling party were led by a number of different staff, undaunted by the task of leading out eight riders on unfamiliar horses for a good canter in an open field.

While I managed to adjust to Classic’s jumping style within a few fences, it took me considerably longer to figure out how to actually get to there. From a year of schooling equitation horses over indoor courses, I had learned to canter in the half-seat—these horses, however, were accustomed to a deeper driving seat and more than once Mel had to remind us to “really sit down and DRIVE to the next fence!” in order to get there.

On my second mount, a very flashy piebald gelding called Monsoon with the typical long Irish face and a mane that stuck up in every direction (giving me plenty of handles to grab in midair) I had no choice but to sit down and drive: he carried himself quite upright like most of the Irish cobs and if I had any illusions of a half-seat we probably would have collided heads. Many jumps later, I was finally getting the swing of things, adjusted to Monsoon’s higher carriage and easy jump, wasting no time or energy over the fences.

Between the morning and afternoon rides, we relaxed in Oliver’s enormous manor-style house, situated at the end of a very long and very narrow driveway bordered by the obligatory tall hedges. The view from the windows of the dining room where we enjoyed lunch by the staff cook included part of the sweeping emerald-green pasture where his horses enjoyed grass overnight or during the day if they were not working. In addition to hiring out cross-country or hacking horses, Oliver also bought and sold horses and foxhunted regularly, keeping kennels of hounds behind his stables.

Oliver took his hounds out for their daily walk on our second day, appearing around the corner of the yard on a sturdy-looking bay horse, his whip in hand and his horn hanging at his side. The dogs frolicked all around him as he hollered encouragement, swarming down the lane like a tidal wave of white and brown, all happily panting and tails swinging. With a few seemingly-random notes on his horn, they were off over the course, iconic and unabashedly authentic.

For our fourth and final session on the afternoon of the second day, I was reunited with Classic and we thundered all over the course, exploring both familiar obstacles, including my favorite combination involving an enormous log, a bright painted-wood banana, some surprisingly deep water (according to the eventer among our party, much deeper than a normal American course) and a leap out over a hedge, and new obstacles, culminating in a thrilling final combination of five fences set up like a jumping lane between a hedge and the river. On our cool-down walk back to the yard, I looked around me and tried one last time to take it all in—where I was, what I was doing, how far I was from home. Truthfully, there is no way to recreate the sensation, and all I can hope to do is to return and do it all again.