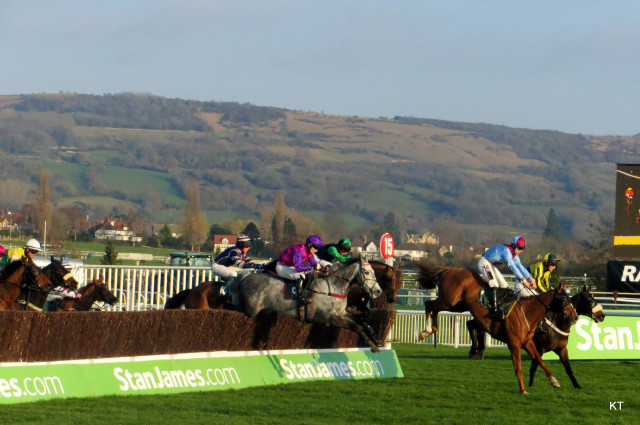 Get the scoop on the Gold Cup and full festival!

Jump racing is a great passion in the United Kingdom and Ireland, and no event better embodies that passion than the annual Cheltenham Festival at the Cheltenham Racecourse in Gloucestershire, England. Drawing the best racehorses in hurdles and chases, Cheltenham likewise draws fans from all over the world for the four-day festival typically held around St. Patrick’s Day each year in March.

Full cards award over £4.1 million in purse money, including hurdle races (over flexible brush-type obstacles), chases (over more solid obstacles) and a very few flat races. The Festival kicks off on March 15, 2016 with Champion Day, crowned by the Stan James Champion Hurdle race.

Subsequent celebration days include Ladies Day on March 16, St. Patrick’s Thursday on March 17 (said to be especially popular with Irish visitors) and the biggest day of the festival, Gold Cup Day on March 18. Tickets for Gold Cup Day are already sold out, as thousands of spectators flock to the track to see one of the most prestigious chases of the jump season. Past Gold Cup champions include such names as Arkle, Best Mate, Golden Miller and Kauto Star.

Cheltenham first began organizing high-stakes steeplechasing in the 1850s, seeking to encourage farmers to start breeding better-quality horses for use in racing. Originally, the horses were ridden by farmers and huntsmen rather than professional jockeys. The sport grew more formalized throughout the twentieth century and also grew wildly in popularity.

On the opening day of the Cheltenham Festival, the crowd roars so loudly at the start of the first race that the sound has become known specifically as “the Cheltenham roar.”

Test your Cheltenham knowledge with this interactive quiz from MyRacing.com:

The Ultimate Cheltenham Gold Cup Quiz – Brought to you by MyRacing.com

For more information about the Cheltenham Festival and the Gold Cup, check out the official festival website.