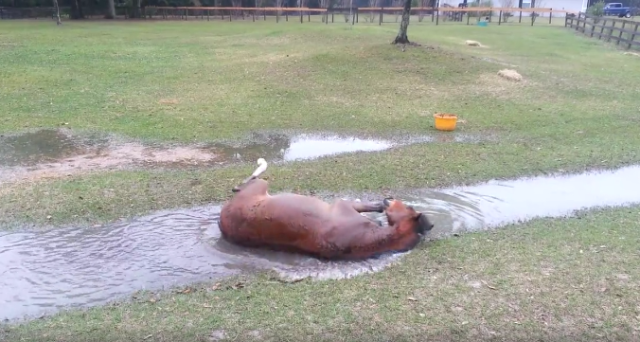 On the Internet what comes around goes around, and sometimes it goes around again! We get the scoop on Glenn the Geek’s twice-over celebrity pony.

Horses in the Morning host Glenn the Geek posted this video of his rescued Hackney Pony, Scooter, having a grand time in a puddle last February and it immediately went viral, garnering some 34,000 shares and almost a million views.

Scooters favorite thing to do after it rains. He did this three times! Scooter is a rescue pony that was a few days…

Posted by Horses in the Morning on Friday, February 21, 2014

Glenn was happy Scooter had his moment in the cyber-sun but figured that the video was a one-hit wonder… until he noticed it start popping up on his Facebook feed again over the weekend.

Celebrity status! Which is extra special considering that Scooter hasn’t always had a happy life. Glenn rescued Scooter in July 2013 after seeing him in a Craigslist ad.

Here are some photos of Scooter when Glenn first got him last June:

“He was a 1 on the Health Scale and really sick — we were not sure he was going to make it,” Glenn recalls. “With a lot of care, good food and love he has turned into a real fun pony and now he is really popular.”

Thank you, Glenn and Horses in the Morning, for sharing this video–and for opening your heart to an equine in need.

Are you a horsesinthemorning.com fan? You can listen in to Glenn and his partner in crime, Jamie Jennings, each weekday morning for entertaining conversation, out of the ordinary guests, numerous regular horse related segments, listener call in, contests, giveaways and more. HN’s own Wylie joins in each Monday at around 10 to share a weekly “Wacky World of Horse Nation” report.

Where to Listen: Listen live each weekday between 9 and 10:30 a.m. Eastern at horsesinthemorning.com, horseradionetwork.com or the embedded flash player on the left side of this page. The show is also available immediately each day as a recorded podcast on the websites or through iTunes or Zune. Be sure to follow ‘Horses in the Morning’ on Facebook as well.