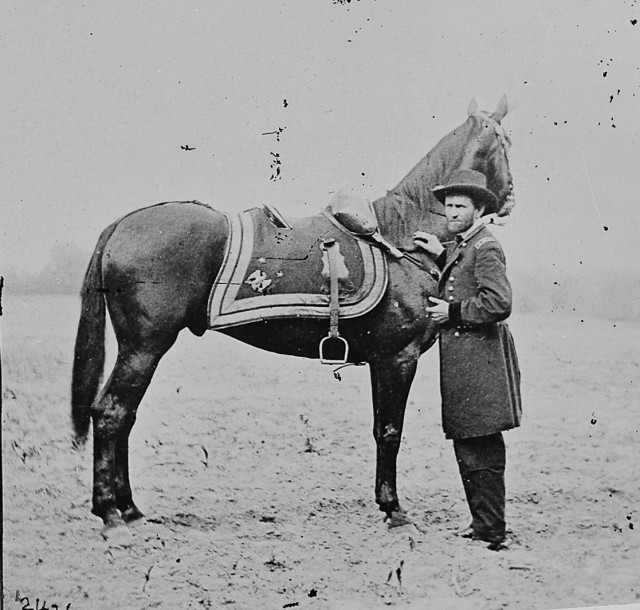 Hannah Richardson introduces us to the most famous horses of the Civil War, their great deeds on the line of battle and the men they carried safely through the war.

In most cases the generals rode more than they walked: the sight of their general on a proud war horse often brought courage to the foot soldiers. The horse’s added height also allowed better visibility for the general to supervise the men. A significant drawback of the added height was that the enemy could easily pick out the general from among the troops, making him an easy target. Many generals’ horses became famous figures after the battles of the Civil War for their speed, courage, stamina and other qualities.

One famous horse was “Stonewall” Jackson’s Little Sorrel. The gelding was originally bought for Jackson’s wife, but was needed by Jackson throughout the war. Jackson began to depend upon the little sorrel gelding, whose tireless and courageous attitude brought inspiration and morale to the soldiers. The gelding wasn’t much to look at: he was a simple brown color, thin and rather unimpressive, but his heart was unequaled. He was steady and not easily spooked, a very important quality in a militia mount.

Jackson was riding Little Sorrel when he was shot and mortally wounded in May of 1863. The gelding was returned to Mrs. Jackson until she was unable to take care of him; the little gelding was then sent off by train to the Virginia Military Institute. The soldiers of the nearby area stood near the tracks and saluted the big-hearted gelding as he passed. Little Sorrel lived out the rest of his life at VMI until he passed at the age of thirty-six.

Another famous horse was Rienzi, who was given to General Philip Sheridan before he raided Rienzi, Mississippi, which was how the horse received his name. Rienzi was pure black except for three white socks. The jet black horse was known for being strong and fast — in fact, his speed determined the fate of Sheridan’s soldiers in October of 1864.

Sheridan was on his way back from a meeting in Washington D.C. when the Confederates launched a surprise attack on his troops. Sheridan was 12 miles from his men in Winchester, but because of Rienzi’s speed he was able to reach his troops in time to lead them to victory. From that day on Rienzi was known as Winchester. General Sheridan stayed with the same mount for the rest of the war. Winchester died at the age of 20, and is now on display in the National Museum of History.

Ulysses S. Grant’s most famous horse was called Cincinnati. Cincinnati was given to Grant as a gift while he was visiting his ill son, on the condition that neither Grant nor any other person would ever mistreat the horse. The handsome chestnut stood at 17 hands and was exceptionally strong.

Grant was known for loving to ride the fiercest and most challenging horses and Cincinnati was no exception. The horse was quiet until led into battle, where he became the perfect picture of a war horse: he could barely be held back as he longed to dive headfirst into the fray, proudly snorting and stamping. It is said that Grant was once offered $10,000 for the horse, but couldn’t bear to part with his favorite mount so he refused. The list of people Grant allowed to ride Cincinnati was quite short, but he allowed President Lincoln to ride him, considering the president a skilled horseman. Cincinnati eventually went with Grant to the white house when Grant was elected president.

Robert E. Lee’s horse Traveller was a gray, 16 hand Saddlebred gelding, not unusual or stunning in coloring but a great mover. Traveller’s name came from his stunning endurance and ability to travel all types of terrain. Traveller was purchased by Lee in 1861 as a four-year0old for $200 and the two were inseparable after that.

After the war Traveller accompanied Lee to his post at Washington College, where the horse lost many hairs from his tail due to his admirers wanting a souvenir. Lee later died in 1870 and Traveller marched in his funeral. Traveller did not outlive his master by long: in 1871 he stepped on a rusty nail and developed tetanus. The veterinarian decided that it was in the best interest of the horse to humanely euthanize him.

Horses played a huge role in the Civil War, whether it was providing moral support for soldiers or pulling the heavy loads of the soldiers camps. Horses deserve a lot more credit than we give them: without them the Civil War could have turned out quite differently.

My name is Hannah Richardson, I am 13 years old and still learning how to balance out horses and homework. I have one horse who is a 10 year old rescued quarter horse named Easy Street; she provides me with plenty of love and laughter.