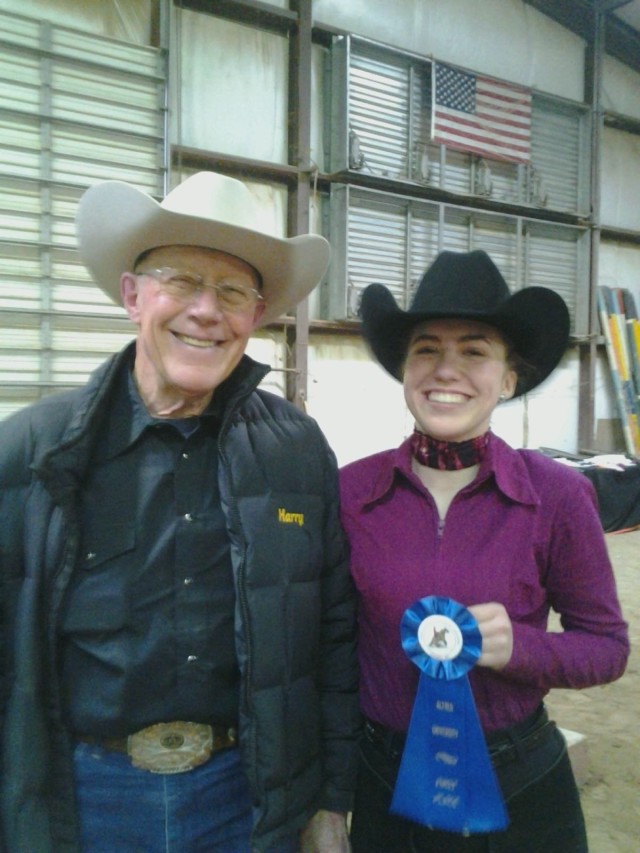 Blue ribbons don’t mean it was a perfect season.

Haley and her coach Harry Hurd.

The final regular-season Intercollegiate Horse Show Association western show of the season took place last weekend, and although Alfred University won the region and I qualified for Regionals along with most of my teammates, I learned a lesson that I won’t forget for post-season shows.

For shows during the second semester, Regionals included, horsemanship patterns are included in all divisions to increase the difficulty level and prepare riders for post-season shows. Having pointed up to Advanced, there were fewer people (only three, actually) in my class, but I was nervous about patterns nevertheless. There is so much more that could go wrong — there is pressure to remember and execute the pattern correctly, maintain correct position and guide the horse with precision and efficacy. Riding exclusively on the rail at all the shows before this one had made me a little bit careless, and that became obvious during my pattern.

The horse I drew, Sarah, is easily one of Alfred University’s most solid horsemanship horses and could probably have done the pattern without any help from me after watching the two runs before mine. It was smooth sailing, and Sarah did her job as usual. However, there was a transition from lope to jog for which I didn’t have enough leg, and we put in a walk step. Minor though it seemed, I had a chance to look at the score sheets today.

The break of gait, small though it was, earned me a -2 penalty and a -1/2 for the maneuver itself. As my coach told me today, a mistake like that would take me from first to sixth at Semi-finals if I make it that far. Today was the reminder I needed that it’s time to step it up and learn all I can before I have to compete at tougher post-season shows; my efforts during the regular season won’t be good enough to get me very far now. This isn’t a comforting recognition, but it’s one that I know is necessary to keep me motivated and competitive at the shows to come. It’s time to put in the work to make sure I won’t repeat my mistakes as well as prevent others from happening.

I had a wonderful first IHSA season thanks to great coaches, saintly horses, and supportive teammates, and I look forward to the learning experiences the post-season will provide!