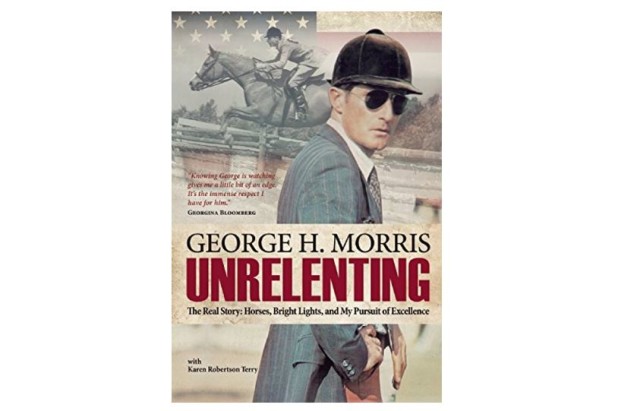 Our sneak-peak review of The Man’s much anticipated autobiography is here, and you can pre-order now!

“If you have the power to create a first-class operation, and you recognize how setting the highest standards with your horse care and training is a key to success, why wouldn’t you strive for it with all your might?”

This lovely quip from Mr. Morris comes early in his incredible tell-all autobiography from Trafalgar Square Books, and probably no single thing better summarizes not only his philosophy on horsemanship, but also much of his life. Over the course of a book which describes in detail 70+ years of an extremely full career, the reader is pushed and pulled by the stories we know, the George Morris stereotypes we’ve all come to expect, and the sometimes thrilling and unexpected revelations he makes about himself and others. (The time he taught a 3-day clinic in a string bikini definitely fell into the “unexpected” category.)

The book is written chronologically from George’s earliest beginnings in the forward seat method with Gordon Wright at Ox Ridge Hunt Club right up to his current teaching schedule after retiring from Chef d’Equipe and selling his beloved operation at Hunterdon. Delightfully, the book is peppered throughout with extraordinary anecdotes from world-class riders across the disciplines and decades. Sometimes they reveal a softer man, a confidence builder. Others are hilarious anecdotes of broken bones and bad ideas that make the Legend a real human being, but no less admirable.

For anyone who loves the history of the U.S. Equestrian program as we know it, Unrelenting is a sensational behind-the-scenes history of our roots, and should be required reading for instructors of all levels. It’s NOT another instruction manual – far from it – but it IS the history of the sport that’s often lost on younger generations.

There’s another element to George’s telling of his own life story that is almost uncomfortable to unveil – George partied as hard as he worked, and though there were highs and lows, it’s clear that he doesn’t apologize for any of it. He talks openly about his personal life, his romances, his drinking and some truly sensational late nights abroad. All of it is a surprising, refreshing and sometimes harrowing examination of the man with high standards but a desperate need for “wild nights”, as he calls them.

It would be easy to get stuck on the personal gossip of George’s life, but nothing in the book compares to the way he talks about the horses and his students. You can immediately tell which ones have George’s heart, and the stories of the sweat equity he puts into his teaching and training across so many disciplines will resonate deeply with any competitor. George’s tutelage of Katie Monahan Prudent, Melanie Smith-Taylor, and Chris Kappler are particularly rich, and are an honest portrayal of George’s craftsmanship in teaching.

Many of George’s memories about his horses read like love letters to the mounts that made him who he is. He hits high notes describing War Bride and Gamecock, but he really hits his stride with Rio, a high-strung Grand Prix jumper with whom he toured Europe in the 1980s. His memories of Rio are full of heart, but are also heart-stopping, as the horse nearly killed him an unreasonable number of times, including his pre-purchase ride!

The book drips with namedropping and upper class privilege that the everyday equestrian couldn’t dream of, and I found myself occasionally irked, but just as often wistful for a time when celebrities would have flocked to Madison Square Garden in mink coats and jewels to watch a horse show. Horses have been eternally interwoven with the upper classes, and frankly if not for that, there wouldn’t be a George Morris — nor a Victoria Colvin, a Jessica Springsteen or an Alison Firestone. The truthfulness of this just made me appreciate the stories about people like Melanie Smith-Taylor all the more: middle class riders with no name recognition who were absolutely dead-set on impressing George Morris, and in turn, George doing everything humanly possible to help them accomplish their dreams.

Unrelenting succeeds in its mission to cement the legacy of George Morris as one of the greatest teachers of all time. While Bert de Nemethy, Gordon Wright, and Billy Steinkraus proved that modern training principles worked, George Morris is repeatedly praised by his peers for being the one to turn the principles into a system. From the first lessons on a pony to making a four-year plan for a horse to make the Olympic team, George always had a system, a plan, and a commitment to excellence.

George Morris’s manual Hunter Seat Equitation of the 1970s is the spiked kool-aid we should all still be drinking, and Unrelenting is the chaser. They are the “how” and “why” of perfection in our sport, and this story of one man’s life will leave the reader deeply motivated to follow suit.