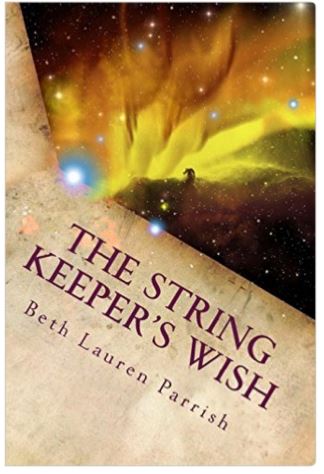 Courtesy of the author.

Have you ever walked into a place to get a basic massage and while chilling in the waiting room realized you’re in sort of a makeshift New Age crystal/incense/Buddhist/chakra type situation, and part of you is like, “I don’t know if this is for me,” and another part of you is like “which of these crystals will guarantee my survival on my next trail ride, because I’m buying it.”? That’s kind of like this book. You came for the promise of horses, and then find yourself in a time traveling wormhole equation trying to save the planet earth. You’re not sure it’s for you, but you also can’t look away.

The book opens by introducing us to the more “divine” cast – the seemingly omniscient beings who are trying to keep Earth connected to the larger web of the universe, as well as the bad guy beings, who want to turn the earth into a race of drone slaves. The ‘good guys’ attempt to sort through how they’re going to save the world, and determine that they’re going to need the cooperation of a chosen few humans on earth: a young girl, a riding instructor, (both modern day) and a Roman soldier (from, you know, Roman times).

You’re thinking, “This is a horse book?” A totally legitimate concern. It turns out that horses are sort of the vessel through which our gang of heroes will reconnect humanity to the greater universe. The heroes are recruited, trained in the art of time and space travel, and then assigned missions to connect horsemen throughout history to their horses on a more divine plane.

The characters are fun. The heroine Abigail is a relatable, awkward and good-hearted teenager, Sergio is a charming guy trying to readjust to living in the modern world, and Naomi is much too calm and reflective to be a riding instructor running a barn. The ‘divine’ cast of characters seem to float between all-powerful holders of knowledge and bumbling jesters who set their willing humans up to fail, which is perhaps what the author intended, but can also be a bit confusing.

Ultimately, the earth-saving ‘missions’ were the most difficult for me to get behind. They lacked rich description to make you really feel like you were “there”, and I found the mission to slave-era Africa an insensitive and ham-fisted plot device that used a real time of indescribable human suffering to add some pizzazz to the story.

The climax has a great build, and the reader zips through the exciting conclusion with bated breath. Parrish tidily concludes the major storyline here, while clearly introducing the opportunity for a sequel at some point down the road.

Overall, there’s a sweet message about how to more powerfully connect to our horses and perceiving them as our connection to the divine that many readers will appreciate. To think of our horses as intermediaries to the heavens is a beautiful idea, and one that Parrish seems to have enjoyed exploring in her debut novel.